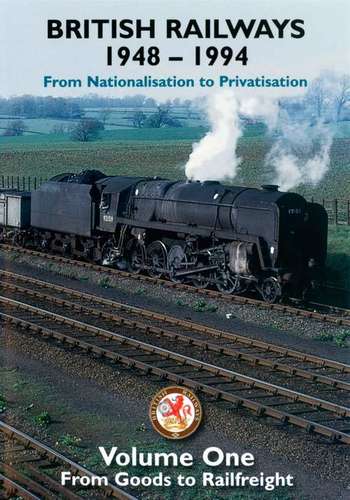 Traditional Values – Britain’s railways were in a perilous state after World War II and so on 1 January 1948 the ‘Big Four’ were merged as ‘British Railways’, but the new nationalised company had much to do to get the rail network into shape. After reviewing the state of the railways and locomotives under construction, British Railways introduced its own Standard designs, including the 9F.

The 1955 Blind Alley – In 1955 the Modernisation Plan was announced to solve BR’s problems; efficient marshalling yards were favoured to speed up the movement of wagonload freight. On the locomotive front, each region was developing its own traction, sometimes with disastrous results – the Metrovick Co-Bos, NBL Type 2s and the Claytons fell by the wayside at an early stage. Steam was doomed, yet the construction of BR Standards continued for another five years. A modern railway was to be a steamless railway – thirteen years and counting . . .

Retrenchment and the Fight against Roads – As investment in Britain’s new motorway system developed apace, BR struggled to retain its status in the movement of freight. The story of containerisation, the development of the abandoned Roadrailer, early Freightliners, the arrival of successful diesels such as the English Electric Type 3, and the end of steam traction on BR; and with it many banking duties. But as the Beeching axe fell, freight had to operate on a smaller network.

‘Seventies’ – The Brakes go on! – Speedlink was born in an effort to streamline wagonload freight, while the MGR operation of air-braked coal workings was proving successful and things were looking up as a corporate image was now taking over. In 1977 BR received the first delivery of the Romanian built Class 56s, but in 1981 the Woodhead route was axed. The traditional railway still existed, but not for long . . .

Sectorisation – Making Freight Pay? – In 1982 British Rail was split into sectors, whilst 1987 saw Railfreight split into sub-sectors and a new livery was born. The freight scene was changing rapidly . . . news of imported coal, imported locomotives for Yeoman and ARC, the elimination of Speedlink, Trainferry, the Class 60 saga, Charterail, and Tiger-rail all took BR to the brink of privatisation.

1994 – The End or a New Beginning? 46 years on, as the BR era drew to a close new Class 59 and 92 locomotives were delivered for National Power’s coal trains and Channel Tunnel traffic respectively – so what is down the line for freight after Railtrack?