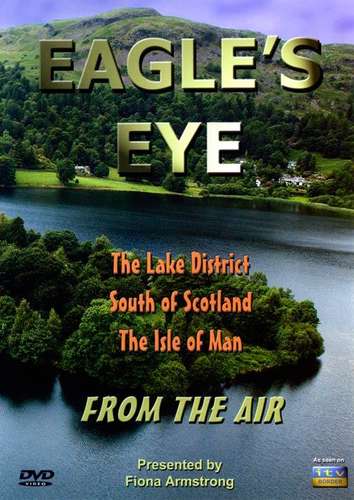 These six programmes take you on an aerial trip of a lifetime, providing views of some of the most spectacular scenery in the British Isles. In more than two hours of captivating television you'll tour Cumbria, the Lake District, Hadrian's Wall, South West Scotland, the Scottish Borders, the East Coast and the Isle of Man, watching the magnificent landscape unfold below.

Programme one travels the Cumbrian Coast, from Morecambe Bay in the south to the vast Solway Estuary in the north, exploring the towns, castles and sights along the way. Next, climb aboard for a thrilling ride through the Lake District, land of mountains and meres, for an Eagle's Eye view of this beautiful region. Windermere, Sca Fell, Keswick and Derwentwater are just some of the places you'll see. Then it's off up the Pennines, from the Ribblehead Viaduct to Kielder Water, visiting historic towns like Kendal, Appleby and Penrith, before cruising Hadrian's Wall from Haltwhistle to the Solway, with a stop at the Great Border City of Carlisle.

North of the Border we travel coast to coast, beginning at the southernmost tip of Scotland, the Mull of Galloway. Fly east along this undiscovered coastline with its magnificent bays, inlets and soft rolling hills, before visiting Dumfries, the Queen of the South, with its connections to Scotland's Bard Robert Burns, and Gretna, the Romantic Capital of the World. Then catch your breath before continuing onwards, north and east through the Debatable Lands, scene of Centuries of fighting between the English and Scots. See the Borders mill towns, the King of Rivers - the Tweed - and the largest and oldest inhabited houses in Scotland. On the way, we pass the scene of one of the bloodiest of Border battles at Flodden Field. Finally, take a voyage of discovery up the striking East Coast, from the impregnable Bamburgh Castle past Lindisfarne and Berwick-upon-Tweed to journey's end at Eyemouth.

In the final programme we go west to a jewel in the Irish Sea, the Isle of Man. Boasting the oldest continuous Parliament in the world, this compact paradise is an intriguing mix of charm and beauty just waiting to enthral you. From rugged shorelines to long sandy beaches washed by gentle waves, picture postcard seaside towns to mountain heights, this island's uniqueness is what sets it apart. Its landscape and history are second to none.

Eagle's Eye offers a stunning view of the world below. Filmed in widescreen format for the ultimate viewing experience, these programmes were shot from an Agusta 109 twin-engined helicopter, using a special gyro-stabilised camera mount for the smoothest possible pictures. The series is and exceptional and distinctive record of journeys through dramatic and spectacular landscapes. These are programmes whose poetic beauty you will want to watch time and time again.