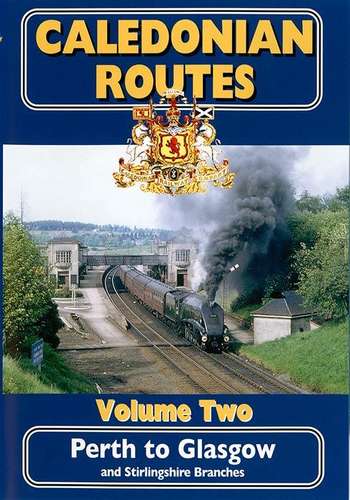 This programme follows on from Volume One (Aberdeen to Perth) to complete the route of the legendary Aberdeen to Glasgow 3-hour expresses.

Cine footage from 25 collections offers comprehensive coverage of the route in the mid 1960s. A brief look at Perth today continues with 1960s station and shed scenes.

Planet on the 2.45 Carstairs vans begins our 'typical' afternoon, the feature including class 5s on Dundee duties, B1 hauled freights, Kingfisher on the 'Grampian' and Golden Eagle on the TPO.

Sir Nigel Gresley departs with the 'Granite City' to begin our trip south over the former 'Caley' mainline; the archive includes a wealth of A4 footage.

The route is covered in detail, including scenes at the closed intermediate stations to Gleneagles, and onwards through Blackford, Greenloaning, Dunblane and Bridge of Allan to Stirling, where busy station scenes and shed footage is included.

We continue through Bannockburn and Plean Junction to Larbert where we diverge from the main line. Top link motive power contrasts with Wemyss No.20 heading for the SRPS at Falkirk after the end of BR steam!

'Then and nows', historic photographs and maps enhance coverage of the Alloa, Grangemouth and Denny branches.

North British and 'Caley' rivalry in the Alloa area is illustrated with 'celebrities' on railtours and a 'Director' on a Queen Street service at Throsk.

The complete Alloa branch is traversed behind a brace of J37s in 1966. Alloa freight activity precedes a trip over the swing bridge on an Alloa to Larbert DMU.

The short but steep Greenhill to Bonnybridge Canal branch is also included, a 'Caley Bogie' visited in May 1960 before traversing the Denny branch, both lines closed to passengers in 1930.

We resume our trip to Glasgow from nearby Greenhill, locations include Castlecary, Cumbernauld Glen and station, Greenfaulds, Greenfoot, Glenboig, Garnqueen, Gartcosh and through Balornock into Glasgow (Buchanan Street).