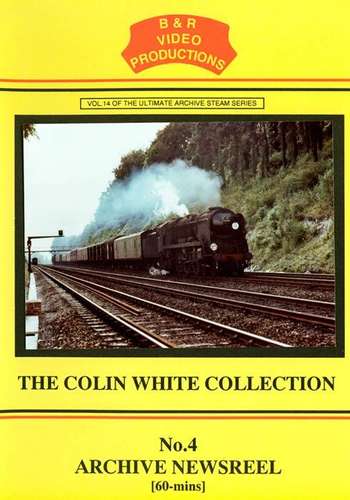 There are nine sections in this film starting with LNWR 790 "Hardwicke''. This remarkable veteran stretched her legs for a short time in the 1970s. Colin White followed her.

On one trip to York double-heading with Flying Scotsman he was even in 4472's cab for part of the journey, offering an almost unique filming opportunity. Other scenes see her in action in the Lake District.

Heaton Mersey, coded 9F, with a study of Stanier's 8Fs coming and going on this shed in its last months of operation where manual work on the coal stage was the order of the day.

The fascinating crane tanks at Doxford's ship yards near Sunderland offer us another form of locomotive. Filmed in 1970 they work hard around the yard before returning to the shed for a lunch break which used to lead to complaints from road users of smoke nuisance.. and what smoke!

This is followed by more unusual locomotives in the guise of narrow gauge articulated types.

Fairlies on the Ffestinog are followed by Saxon-Meyers in East Germany with transporter wagons and the amazing Herberlein brake; engines sporting a steam operated bell.

The Mallett articulated engine is next studied again in Germany where 0-4-4-0 tanks work hard in the snow.

An A4 meets an unrebuilt Bullied in 1967 when 4498 visited the Southern, ah! the charm of the chime.

Returning to the continent for a few minutes to sample super power with a potted look at 2-10-0 types in Germany, Austria, Poland and Czechoslovakia.

Double headers in the snow and a train with 3 2-10-0s as motive power. Even if your loyalties lie with the Big Four you cannot but help marvel at the power of some of these continental giants and in some superb locations.

Back to our shores 6115 'Scots Guardsman' had two main line outings in 1978 from Dinting to York. Both occasions were captured before she disappeared from the scene to hopefully re-emerge in the 2000's.

We cover the Isle of Wight in Volume 21 and will do so in later productions but this section is a tribute to the last day railtour on the 31st December 1966 when the LCGB visited the island. The tour featured the Class 02 tanks which were at the time the oldest locos in BR stock.

Finally a few Bulleids act out their last duties around Bournemouth and Poole including 34001 and 34100.