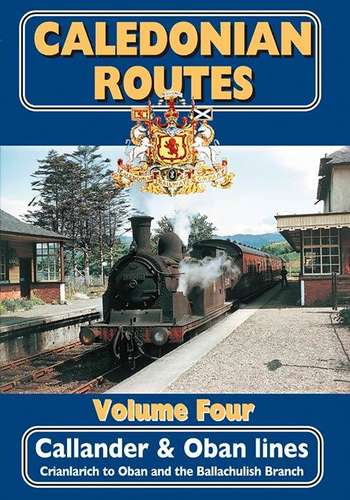 We are currently waiting for this title to come back into stock.

The 'Caley' West Highland story continues with coverage of the surviving section of mainline, the rise and fall of the Ballachulish branch, the use of the Crianlarich link to integrate former rival routes under British Railways and ultimately its role in the reshaping of the West Highland railway map.

We conclude with the elimination of 73 miles of former 'Caley' lines in the area, a rock fall in Glen Ogle accelerating the truncation of the Oban mainline and its isolation from the rest of the erstwhile Caledonian Railway empire.

Modern scenes of Oban and Mallaig services 'splitting' at Crianlarich, and a trip down the spur to the C&O, set the scene for 1960s archive as under British Railways the spur saw unprecedented activity.

One of the last clockwise 'Six Lochs' DMU land-cruises takes us to Killin where the Television Train, massive by Killin standards, causes a shunting conundrum in August 1963.

The two mainline diesels and regular branch engine all get involved before we revisit Crianlarich where a brace of Black 5s haul another excursion up from the C&O to enter Crianlarich Upper in 1957.

From Crianlarich Lower we resume our mainline journey through Tyndrum, Dalmally, Loch Awe, Taynuilt and Achnacloich to Connel Ferry.

Our overview of local railway development concludes with the complex history of the Ballachulish branch before we continue to Oban. B.R. connections with MacBrayne shipping services to Mull and the Outer Hebrides are illustrated with cine of the Claymore, Lochearn, Lochnevis, Lochdunvegan and King George V.

The Oban interlude continues with station scenes and shunting at the upper yard and MPD before we travel to Ballachulish in the last years of the 'Caley' tanks, a journey enriched with lineside action. Beyond Ballachulish we view the neighbouring slate quarry, Kinlochleven and its electric railway and Glencoe.

On 12th May 1962 an SLS railtour bade an enthusiasts farewell to C&O steam using 'Caley 123' and Glen Douglas; 'on train' footage is interwoven with shots at Crianlarich, Tyndrum and Oban, before the return trip is seen at Balquhidder, Strathyre, Callander, Doune and Stirling. On the same day, the 'steam oasis' branches to Killin and Ballachulish employed 80092 and 78052 respectively, but it was steam's 'last knockings' at the latter.

Thereafter, the implementation of Beeching Report recommendations drives the story, albeit with unexpected twists such as a reprieve for Ballachulish in 1964 and the Glen Ogle rock-fall.

1st November 1965 was to see closure for the mainline between Dunblane to Crianlarich and the Killin branch, but beyond Callander the enforced isolation saw BR pull the plug overnight, some five weeks early.

Scenes of D5351 on the last day for the Ballachulish branch, 26th March 1966, precede a review of the next forty years.

The varied conclusion embraces ScotRail initiatives, signalling and motive power changes as well as luxury and steam hauled excursions; a B1 and K1 doubleheader bring down the curtain as they assault the 1 in 49 west from Tyndrum.

Maps, ephemera, photographs, cine and modern scenes are used throughout as we conclude the fascinating history of the C&O and its two branch lines.

This DVD features two audio options. View the programme with narration by Stuart Sellar, then watch it again and lose yourself in the past with uninterrupted archive sound.