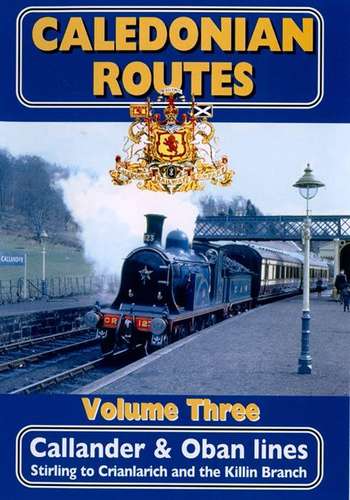 The Callander & Oban lines - Stirling to Crianlarich and the Killin Branch

The Callander and Oban was the pioneer railway of the West Highlands, a trip along the fertile Teith Valley into Callander contrasting with spectacular climbs ahead where the rugged mountains squeezed the railway into narrow passes and alongside countless lochs to reach the west coast of Scotland.

This is the first of two programmes covering Caledonian interests in the area, a 'pair' inspired by the cine of Alan Kirk, his love of the region intertwined with that for the C&O and particularly the oasis of steam that survived on the Killin Branch.

Alan's cine and that of our regular Scottish photographers combine to illustrate all stations and even the Oban mainline's isolated passing loops as well as its associated branches to Killin and Ballachulish.

In the sparsely populated areas the inclusion of cine film from two tourists, swept along by the scenic splendour, enables this volume to offer a complete picture of the 'lost' section of the Oban mainline.

After an overview of railway development in the West Highlands we examine the everyday interaction between the former 'Caley' routes and shipping, bus and postal services of the region.

Thereafter, we concentrate on the now 'lost' 40 mile section of line between Dunblane and Crianlarich junction.

Diverging from the Aberdeen mainline the Dunblane, Doune and Callander Railway provided the springboard for the Callander and Oban Railway, 'Caley 123' on an afternoon run from Glasgow (Buchanan St) in October 1964 taking us through to Callander.

Coverage of the single-wheeler's visit, including a cab ride, is complemented by another unusual visitor, a V2!

Everyday scenes include a BRCW Sulzer type 2 passing 80061 as it terminates on a service from Stirling, whilst Black 5s work the regular steam hauled services between Callander, Edinburgh and Glasgow; trains in Glasgow, Stirling and Dunblane supplement the lineside footage.

After considering the initial stage of the C&O, as far as Glenoglehead, we progress through the Pass of Leny, Strathyre, Kingshouse, Balquhidder and up Glen Ogle.

The Observation saloon, Pullman coach, tours of the Trossachs and surrounding area are illustrated with photographs, cine and publicity material, showing how the 'Caley', and its successors, promoted this land of Rob Roy McGregor and the Waverley novels.

The mainline bypassed Killin, so the locals built their own railway, a 5 mile branch to the shore of Loch Tay; 1930s scenes of the associated steamer to Kenmore follow clips at Killin Junction.

One of the regular DMU operated 'Six Lochs Land Cruise' excursions is seen before our journey resumes to Crianlarich, the complex operations of the Killin school train concluding this volume.

Maps, ephemera, photographs, cine and modern scenes are used throughout to enhance the fascinating history, operational quirks and diversity of these lines.

Pre-grouping locomotive types include a 'Caley Jumbo', 439 class 0-4-4Ts, and both the 'Caley single' and Glen Douglas on railtour duties.