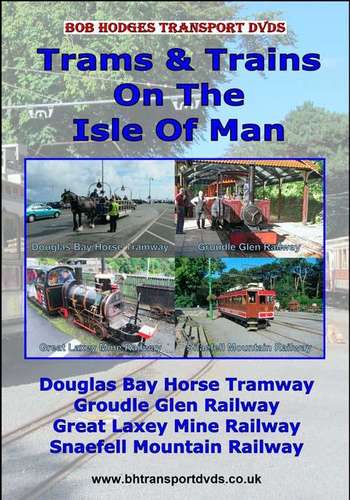 This DVD features the Douglas Bay Horse Tramway, the Groudle Glen Railway, the Great Laxey Mine Railway and the Snaefell Mountain Railway. There is also a bonus chapter featuring the Manx Electric Railway filmed during the 125th anniversary celebrations in September 2018.

The Douglas Bay Horse tramway is now operated by Isle of Man Railways who took over the line from Douglas Corporation in 2016. Since the take over the tram fleet has been reduced but several trams have been overhauled and passenger numbers have increased.

The Groudle Glen Railway was opened in 1896 and was built to 2ft. gauge, the line connected the upper part of the glen with a zoo at Sea Lion Rocks, the line finally closed in 1962 The line was progressively reopened between 1983 and 1992, this video features 2 visits to the railway in 2013 and 2018.

The Great Laxey Mine Railway was opened in 1823, to serve the Great Laxey Mine which at one time was the largest lead mine in the world. Steam traction arrived in 1877, but the railway, along with the mine closed in 1929. The above ground section of the line was reopened in 2004-6, 2 new engines, replicas of the originals, were built for the reconstructed railway. This chapter also features the Laxey Wheel, the largest working water wheel in the world.

The Snaefell Mountain Railway was opened in 1895 and runs from Laxey to the summit of Snaefell, 2036ft. above sea level. 5 of the original 6 trams are in service, no. 3 having been destroyed in an accident in 2016. There are now 4 braking systems on the trams, including the Fell system, this is a centre rail that the tram can grip on to for emergency braking. The bonus track, scenes from the Manx Electric Railway 125th anniversary celebrations in September 2018, for full coverage of this event see DVD no. 10163, 'Manx Electric Railway 125'.

Subtitles, no commentary, enjoy the sights and sounds of trains & trams on the Isle of Man.