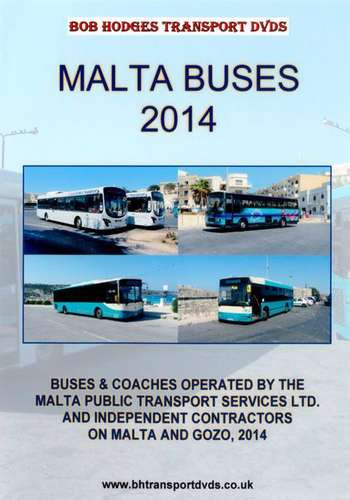 Malta Public Transport Services Ltd. (the MPT) took over the running of the bus services in Malta and Gozo at the start of 2014 after Arriva, who had been the contractor since July 2011, pulled out after making a considerable financial loss. The MPT inherited a fairly standardised fleet of buses from Arriva which included 49 nine metre long King Long XMQ6900J and 125 King Long XMQ6127J eleven metre buses. Apart from these vehicles there were 10 Optare Solo SR hybrid buses and 2 Bluebird Minibuses which operate on the Valletta town service 133, all of these buses are still operating in the Arriva aquamarine and cream livery.

There are a number of low floor buses that Arriva inherited from the previous independent operators in July 2011, these are registered in the BUS4xx and 5xx series and they are of various makes including older King Long models, Maltese built Scarniff bodies on MAN and Volvo chassis, BMC and Dennis. The MPT has now leased 22 Optare Solos and 23 Volvo B7RLE with Wrightbus bodies, these started to arrive in Malta in the spring of 2014, the Optare Solos are in a White livery and the Volvos are a very pale lilac and have started appearing with 'Malta Public Transport' logos.

Since the withdrawal of the Mercedes-Benz Citaro Bendybuses in 2013, several independent contractors have been operating some of the routes, these include the Koptaco Cooperative, Cancu Supreme Transport, Cancu Coaches, Paramount Garage, J J Abela and Peppin Transport amongst others. Vehicles used by these operators are varied and range from 1980's and 1990's coaches to modern low floor buses, this means that there is still considerable variety in bus operation in Malta in 2014. Hired minibuses are also being used on lightly trafficked routes, these are mostly in the standard red minibus livery although a few are white, these are supplied by some of the many minibus operators on Malta. The situation on Gozo is different inasmuch that all the bus routes are all operated by the MPT, mainly with 9 metre King Longs, although there are also a few of the 11 metre King Longs. The coach operators in Gozo have mostly formed themselves into the Gozo Coaches Cooperative and most of their coaches are in a new livery although some are still in the old Gozo colours of grey and red. There are a few of the old route buses still to be seen in both Malta and Gozo, they have been immaculately restored and are available for tourist use although some also turn up on school bus duties.

Subtitles, no commentary, enjoy the sights and sounds of buses in Malta and Gozo.