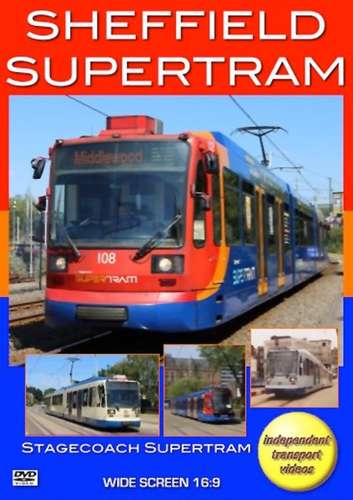 The Sheffield Supertram system began operation in March 1994. It is also referred to as the ‘South Yorkshire Supertram’ as it is owned by the South Yorkshire Passenger Transport Executive. Originally operated by South Yorkshire Supertram Ltd., but now currently operated by Stagecoach, with the trams carrying the fleet name ‘Stagecoach Supertram’. The original livery carried by the trams was mid-grey with a dark blue skirt, a scheme still featured on most of the traction poles! In 1997 when Stagecoach began operating the fleet, the livery was changed to the then current bus livery of overall white with orange, red and blue stripes with the Stagecoach fleet name and ‘Supertram’ branding. Between 2006 and 2009 the tram fleet was refurbished and the current livery of mostly blue with red ends featuring an orange swirl between the two main colours was introduced. In 2010 tram 120 was treated to a cream and blue livery not unlike the one carried on the original Sheffield tram fleet that ceased operating in 1960. It carries the Sheffield City Coat of Arms, which also marked 50 years since the closure of the first generation tramway network.

The first ‘Tram-Train’ in the UK will be operated by ‘Supertram’. It will run on an extension to Rotherham on Network Rail’s line from Meadowhall Interchange to Rotherham Parkgate Shopping Centre. A fleet of seven Vossloh built ‘Citylink’ articulated sets will be used. Known as TOPS Class 399, these tram-trains are painted in the Supertram blue livery. The original tram fleet is numbered between 101 and 125, being Duewag/Siemens AB88T trams built in Düsseldorf, Germany between 1992 and 1994. Supertram runs on three lines, from Meadowhall, Halfway/Herdings Park and Middlewood/Malin Bridge. They all converge on the triangular junction at Park Square in the city centre. The routes are referred to by colour: Yellow for the Meadowhall to Middlewood route, Blue for Malin Bridge to Halfway and Purple for the Cathedral to Herdings Park route.

This programme starts with a brief look in still pictures of the trams in their first few months of service in the city centre and at Meadowhall. We then move to some archive video taken between 1994 and 2000 through the camera of Dave Spencer featuring trams in service. The independent transport videos cameras begin our filming in May 2017 as we travel from the Meadowhall Interchange to the city centre calling at Nunnery Square, where the Supertram depot is situated. Here we see the new ‘tram-train’ Vossloh units leaving the depot on driver training duties. We also catch up with them later in the programme running through the city centre. During this visit we concentrate on the city centre with filming taking place at various locations including Fitzalan Square/Ponds Forge, Park Square, Cathedral, West Street, Castle Square and High Street.

Our second visit, filmed over two days in July 2018, takes us around the system. Beginning at the depot at Nunnery Square we head towards the city and film at City Hall, West Street, Glossop Road and at the University of Sheffield stop. The busy suburb of Hillsborough is next with action captured on Langsett Road and Holme Lane. We travel to Middlewood onboard tram 120 to film at this terminus before returning to Middlewood Road in Hillsborough and then onward to the Malin Bridge terminus. Further rides are taken on trams 122 and 101 as we head over to Park Grange Road which is on the Herdings Park/Halfway – Purple and Blue lines. We return to the city filming at Granville Street, Park Square and the busy Fitzalan Square/Ponds Forge stop. A ride on tram 104 takes us to Birley Lane, the temporary terminus of the Halfway line as it was closed for ‘rail replacement’ work. We hope to cover the remainder of the route on a future programme. We return to the city centre on tram 117 and conclude our filming at Meadowhall South/Tinsley before arriving at Meadowhall Interchange where our journey began! We hope you enjoy our programme featuring the Sheffield Supertram.