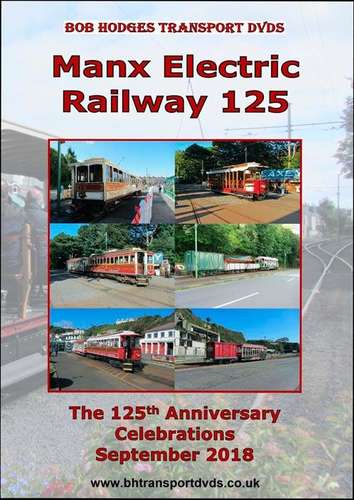 The Manx Electric Railway opened on September 1893 from Derby Castle, in Douglas, to Groudle Glen. Extensions to Laxey in 1894 and to Ramsey in 1899 gave us the 17 mile long, 3 ft. gauge electric railway that we have today. The original trams were unvestibuled saloon cars nos. 1/2 & 3, of which 1 & 2 are still in service, they are the oldest trams still in service on their original line in the world.

The MER celebrated the 125th anniversary with a series of events from the 1st - 8th September 2018 and most of the events can be seen on this DVD. Included are parallel runs, the cavalcade at Laxey station, special runs with goods trailers, night time running and the cavalcade on the Douglas Bay Horse Tramway, which is now part of the Isle of Man Railways group. Enhanced services were also provided on many of the event days, all operational trams are featured in this video at a variety of locations on the line.

Subtitles, no commentary, enjoy the sights and sounds of the Manx Electric Railway.