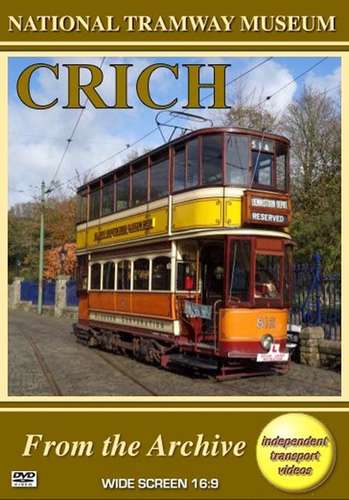 The National Tramway Museum is situated close to the village of Crich in Derbyshire. Established as far back as 1959, the museum is on the site of a former mineral railway built by George Stephenson in 1841. Since its establishment the museum has grown into a superb attraction featuring many buildings and items once found in the streets of Britain, some dating back to the Victorian age. It is evolving all of the time and is home to a fantastic collection of preserved tramcars, the oldest dating back to the 1880s. This DVD programme has been compiled from the extensive film and video archive of independent transport videos. None of the footage seen in this programme has been published before and it shows how the museum site has grown up to the one that we can all enjoy in the 21st century. We take you on a journey from the 1980s to 2014, filmed over seven visits. Beginning in the 1980s we have some lovely sound cine film taken by renowned transport photographer Malcolm King. The second visit filmed on silent cine film, also taken by Malcolm in the 1980s is when a preserved Leeds City Transport Daimler double-decker paid a visit with a contemporary West Yorkshire PTE Leyland Olympian. These buses are seen running alongside preserved Leeds tramcars.

During our third visit in the early 1990s our cameras also take a look at the attractions and exhibits in the Exhibition Hall including a superb fairground organ. We also take rides on three tramcars: Sheffield Corporation 510, Liverpool Corporation 869 and Glasgow Corporation 812. The next visit is in 2001 – on a special World War II event day. A great atmosphere, as many people are dressed up in either military uniform or dress of the day as they travel on the trams or walk about the village. There is also music of the day to keep everyone entertained and a ride on London Passenger Transport Board tramcar 1622 is also enjoyed. In 2009 our cameras paid a visit on a much quieter day. We take rides on Leeds City Transport 399 and 345 and enjoy a walk through the Woodland Walk and Sculpture Trail. Our sixth visit is in August 2013 where we enjoy a ride on Blackpool Corporation ‘Boat’ 236 along the lovely route that the trams take. Many trams are seen operating on this day really showing off this excellent attraction.

Apart from the trams and attractions, the National Tramway Museum offers the ‘Ultimate Tram Driving Experience’. This is a day where you can drive a tram at the museum. Full training is given at the beginning of the day before spending the day with a driving instructor supervising you driving along the tram route. Your usual cameraman had the opportunity to indulge this ‘experience’ in October 2014. The highlights of that day were captured on camera by Malcolm King for you to enjoy. I can certainly recommend this experience, as it really shows what the tram driver had to do all those years ago. Our tramcar for the day was Glasgow Corporation 812, built by the Corporation in 1900. We hope that you enjoy our visit to the archives as much as we have enjoyed filming them and enjoying the experience of driving a tram!