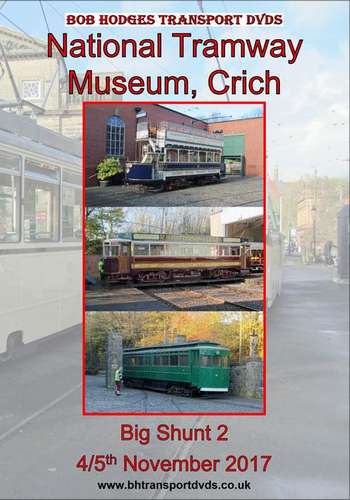 This DVD features the big shunting operation that took place at the National Tramway Museum, Crich, over the weekend of 4/5th November 2017. Depot 2 (roads 4/5 & 6) at the museum had to be emptied out as building contractors were coming in from the 6th November to start on the reconstruction work on the depot complex.

To make room for the trams displaced from depot 2, many other trams were moved around with several trams ending up in the Great Exhibition Hall. Some trams were able to move under their own power, but others were moved around by the ex Blackpool Electric Loco, great use was also made of the traverser, the museum's battery powered tractor, PAT01, manouvering trams on and off the traverser and into the depot and Great Exhibition Hall. Several non operational trams such as Sheffield no. 189 and Glasgow no. 1115 could be seen out in the open on the depot fan, the first time for some years in some cases.

This DVD also features the trams that were in service over the weekend on the museum's line from Town End terminus to Glory Mine. These included London County Council no. 106, Glasgow Corporation no. 22 and Metropolitan Electric Tramways prototype 'Feltham' tram no. 331.

No commentary, subtitles, enjoy the sights and sounds of trams at the National Tramway Museum including the 'Big Shunt 2' shunting operations.