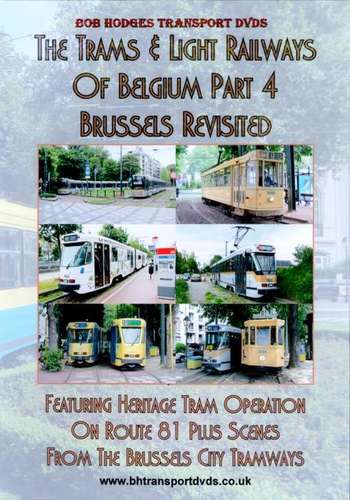 Public transport in Brussels, the capital city of Belgium, is provided by 'Societie des Transports Intercommunaux de Bruxelles'/'Maatschappij voor het Intercomunaal Vervoer te Brussel', otherwise known as STIB/MIVB. This operator is responsible for the Metro, the bus services and the tramway system, the subject of this DVD.

The 1st May 2014 was the 100th anniversary of the opening of tram route 81 which although it has changed over the intervening years, the main part of the route is substantially the same as it was 100 years ago. To celebrate this event the Brussels tram museum ran a number of its heritage trams in service and the low floor cars plus the regular service trams in service along the route from Montgomery to Place Bara, which is just beyond the Gare du Midi. The regular service trams continued on to the terminus at Marius Renaud, the heritage trams (all single ended) were reversed at Place Bara, the Montgomery terminus having a loop making reversing unnecessary. Most of route 81 is still on street based track and as such is a reminder of how the Brussels tramways were before the introduction of tram subways and reserved track.

Part 2 of this DVD is a follow up to 'The Trams and Light Railways of Belgium Part 1' which featured scenes from the Brussels tramways including vintage tram operation from the Woluwe tram museum. This chapter covers areas of the city that were not covered in the first DVD and includes scenes from the south of the city including Fort Jaco, St Job, Van Haelen, Uccle, Stalle, Vanderkindere, Churchill, Legrand and Albert. The trunk route 7 is covered in the Petillon and Schaerbeek areas and the terminus of route 3 at Esplanade is also visited. Route 39 from Woluwe to Ban Eik is also covered, including the section of this route which was once part of the Brussels - Tervuren electric railway, some vintage trams from the tram museum at Woluwe can also be seen. Brussels tramways still feature traditional street running, some on quite narrow streets, reserved track in wide boulevards plus tram subway operation, all of which is shown on this DVD.

Subtitles, no commentary, enjoy the sights and sounds of the trams of Brussels.