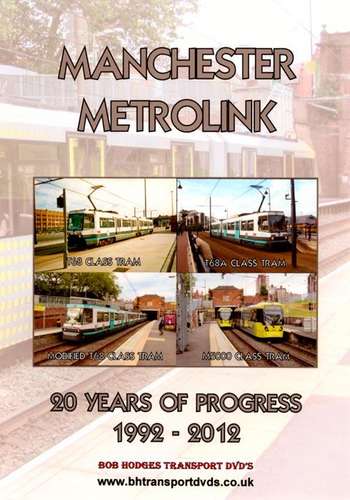 Construction of the Manchester Metrolink system started in 1989 and the first section between Victoria Station and Bury was opened in 6th April 1992. The rest of the initial system was opened between 27th April and 20th July 1992, the line to Altrincham opening on this date. The extension to Eccles from Cornbrook was opened initially as far as Broadway on 6th December 1999 and the final stretch to Eccles being opened on 21st July 2000. Eventually work started on phase 3 of the expansion of the system and the lines to Oldham Mumps and St. Werburgh's Road opened in 2012.

Currently under construction are the extension of the Oldham route to Rochdale including a diversion into the town centre of Oldham, the extension of the line from St. Werburgh's Road to Didsbury, and a new line from Piccadilly Station to Droylsden, which will eventually reach Ashton Under Lyne. New routes to Manchester Airport and the Trafford Centre are planned together with a second city crossing between St. Peter's Square and Victoria Station.

The Bury, Altrincham, Oldham and St. Werburgh's Road routes are constructed on former main line railway suburban lines and are linked in the city centre by street tracks between Manchester Central (formerly GMEX) and Victoria Station via Piccadilly Gardens where the route to Piccadilly Station branches off. The Eccles line was new construction through the former Manchester/Salford dock area which has been totally rejuvenated with new offices and apartment blocks replacing the old dock buildings, this line also includes a street running section on the Eccles New Road.

The original fleet of 26 trams Nos. 1001-1026, class T68, were built in 1991-2 by Firema of Italy. Most of this class have been modified with covers to the couplings and bogies (a requirement for the Eccles route). Withdrawal began in 2012, the class will be gone by 2014. Six trams of the T68A class were delivered in 1999 for the Eccles route. These trams were built by Ansaldo-Firema of Italy, outwardly similar to the T68 class they have different electrical equipment and were delivered with front valances and retractable couplers. The third class of tram is the M5000 built by Bombardier in Germany and Austria. These are numbered from 3001 upwards and delivery started in 2008, eventually the fleet will consist of just this type of tram.

This DVD was filmed mainly between 2008 and 2012 although there are some early sequences from 2001. The DVD is divided into three chapters as follows:

Part 2: The routes from Victoria Station to Bury and Oldham, the line to Oldham branches off the Bury line just before Queens Road Depot.

No commentary, subtitles, enjoy the sights and sounds of Manchester trams in action.