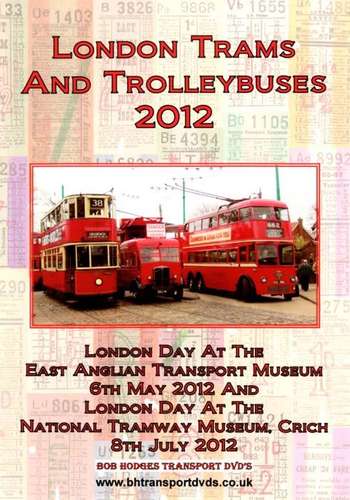 This DVD is a record of two museum events that were organised to mark these anniversaries. The first was at the East Anglian Transport Museum at Carlton Colville, near Lowestoft on the 5th and 6th of May 2012. This featured eight ex-London trolleybuses of the nine that are in preservation in the UK, the exception being No.1253 (EXV253) which is a static exhibit at the London Transport Museum in Covent Garden, London. Even No.1 (HX2756) came up from the depot at Acton to participate, making several runs each day despite its age and somewhat fragile condition.

Other vehicles in service included nos. 260 (CUL260), 796 (ELB796) - recently repatriated from Paris where it had been since leaving service in 1960. Also in service were 1201 (EXV201), 1348 (EXV348), 1521 (FXH521) Q1 class nos 1768 (HYM768) and 1812 (HYM812). Newcastle Corporation No.628 (NBB628) was also running this trolleybus was built to the same specification as the London Q1 class, although there are detail differences such as destination indicators and internal trim which was to Newcastle specification, it made an interesting comparison with the London Q1's however. Tower wagon 89Q (DGJ181) was also running and made several circuits of the museum grounds. The final vehicle running at the EATM was London HR/2 class tram 1858 which was in fine fettle, making many journeys to and from the Woodland terminus of the EATM tram line.

The second event was at the National Tramway Museum at Crich, Derbyshire on the 8th July 2012. Several former London trams were in operation including London E1 class No.1622, and Metropolitan Electric Tramways 'Feltham' centre entrance prototype No.331. London United Tramways No.159 was on display together with London County Council No.106, unfortunately No.159 was unable to run in service because of a derailment on the previous day, its place was taken by Johannesburg No.60 which was masquerading as an LCC 4 wheel tram. Decorated with Union Jack flags and bunting, it made an impressive sight. After lunch there was a cavalcade of the London trams including ex-London Tramlink works care 058.

The day concluded with a re-enactment of the final tram journey of 6th July 1952, complete with speeches and Auld Lang Syne. Both museums are to be congratulated on the organisation of these superb events, they will be remembered for a long time.