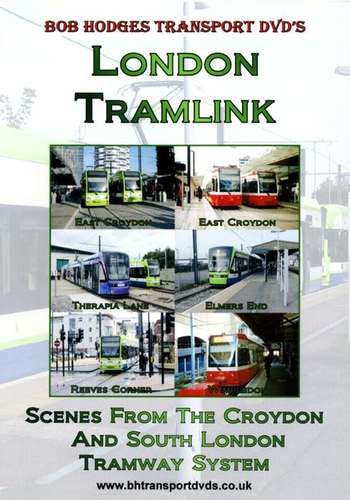 The London (originally Croydon) Tramlink system was opened in May 2000 after construction between 1996 and 1999. The system is a mixture of former rail alignments, street running in Croydon town centre, and new reserved track routes on the New Addington and Beckenham Junction lines.

The original trams were 24 Bombardier CR4000 built in Austria and numbered 2530 - 2553 and were delivered in London red and white livery. Following take over by Transport for London in 2008, the system was renamed London Tramlink and as the trams were internally refurbished the livery was changed to the current lime green, blue and white. The final tram carrying red livery was repainted in 2009.

The numbers of passengers carried has risen every year since the opening of the tramway, in 2012 28.6 million passengers were carried, a 60% increase since 2004.

In 2012 six new Stadler Variobahn trams arrived which were built in Switzerland, these are numbered 2554 - 2559 and are 5 section, 6 axle cars. All are in fleet livery except 2554 which is in a special Croydon council livery in recognition of the financial contribution from the council towards the cost of the new trams. In the early years of operation, several trams appeared in advertising liveries, some of which can be seen in this DVD.

Four routes are currently operated, Route 1: Croydon to Elmers End, Route 2: Croydon to Beckenham Junction, Route 3: Wimbledon to New Addington, and Route 4, introduced in 2012, Elmers End to Therapia Lane. The depot and workshops are next to Therapia Lane stop and include outside storage tracks plus a fully fitted workshop capable of dealing with 4 trams. Future extensions are planned with Crystal Palace being the most likely to be built if funding can be found, the route would branch off from the Beckenham Junction line near Birkbeck.

This DVD is divided into four chapters:

Part 1: The Wimbledon - Croydon line.
This section is based on the former suburban line opened in 1855 and closed in 1997. The line was built wide enough for double track, but only single track was installed originally. This has had repercussions in recent years with several sections of single track in place. The Mitcham - Mitcham Junction section has recently been doubled and there plans to double more sections.

Part 2: Croydon town centre.
This is a one way loop around the town centre via George Street, Church Street, Tamworth Road, Station Road and Wellesley Road. Reserved double track in George Street (East) provides a link to East Croydon Station and on to the New Addington and Beckenham lines.

Subtitles, no commentary, enjoy the sights and sounds of the trams of London Tramlink.