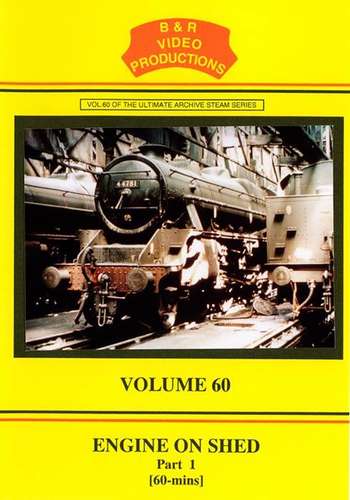 With the demise of steam on Britain's railways the work of the engine sheds also disappeared. To keep a steam locomotive in traffic entailed much manual labour.

Throughout our long association with enthusiast railway films we have amassed enough material to cover the subject in detail, albeit using some film already seen in some of our videos.

By collating this film with new material obtained, we have put together the most comprehensive documentary on this subject ever.

This video contains pure archive film on locomotive depots. There are no scenes of the shed's locomotives out on the main line.

This is how it really was for the many thousands of men involved in the maintenance and repair of the steam locomotive.

Part 1 shows at the atmosphere of an engine shed from roundhouse to straight sheds.

Smoke and steam abound on all five regions.

On arrival on shed, the fires were cleaned or dropped providing many volcanic scenes.

Then to the ash pits to be cleaned.

Smokebox emptying and tube cleaning were the dirtiest jobs on the railway.

Replenishing the engines with coal and water took many forms and with sometimes hilarious results.

Speed of turnaround was sometimes important with some breaking of the rules.