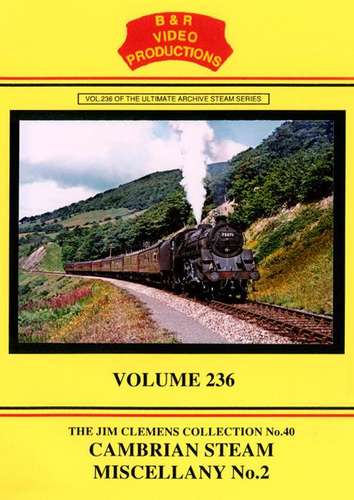 THE JIM CLEMENS COLLECTION No.40

The second volume in our popular “Miscellany” series to cover the routes to the Cambrian Coast. Here it has been compiled almost entirely from cine film taken by the late Jim Clemens along with some additional previously unused material from the B & R archives.

We begin at Gobowen in the autumn of 1966 and see double-headed Class 2 2-6-0s on stone trains from Nantmawr Quarry. Steam still reigned supreme on the Paddington to Birkenhead services although the DMU shuttle to and from Oswestry via Park Hall Halt had just a few days of life left. There is excellent coverage of the Cambrian main line from Whitchurch via Ellesmere, Oswestry, and Llanymynech to Welshpool. Return journeys are also made over the Ellesmere to Wrexham and Llanyrnynech to Llanfyllin branches.

Next we follow the route of the “Cambrian Coast Express” from Shrewsbury to Welshpool, Abermule, Newtown, Moat Lane Junction, Carno and Talerddig. Here we spend time watching steam battling with Talerddig Bank before carrying on to Llanbrynmair, Machynlleth, Dovey Junction, Borth and Aberystwyth. Filmed from the Vale of Rheidol line in 1964, we even parallel a ‘Manor’ nearing Aberystwyth hauling a freight train. And at Aberystwyth “Manors” are seen in profusion!

We also feature the alternative Great Western line from Ruabon to the coast with scenes at Trevor (where Pannier No.1660 is shunting), Llangollen, Berwyn Halt, Bonwm Halt, Corwen, Llandrillo, Llandderfel, Bala Junction, Llanuwchllyn, Drws-y-Nant, Dolgellau, Penmaenpool (including the engine shed), and Arthog. We see the shuttle from Bala Junction to Bala plus film from 1959 of the passenger service onwards to Blaenau Ffestiniog Central including the SLS “Last Train” in January 1961.

Most of the film is in colour and has been assembled in the order the film runs off the original cine reels. An authentic sound track has been added along with an informative commentary to compliment this further nostalgic look at these last years of steam on the Cambrian.