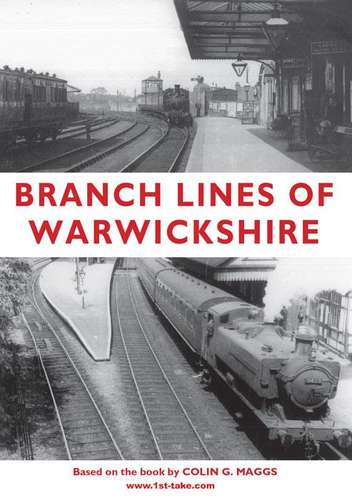 1st Take’s ever-popular series of films on the Branch Lines of England now takes us to the very heart of the country, as we explore the old railways of Warwickshire.

Although many lines eventually became part of the Great Western Railway, some belonged to the London, Midland & Scottish network. They were constructed between the early 19th century and the first quarter of the 20th, performing a wide variety of roles.  Towards the north is the London & Birmingham Railway, which later became part of the London & North Western Railway, and other routes included the Midland Railway’s mainline in the area, which ran from Bristol and Gloucester through Birmingham to Derby. You will discover how and why they were built and, providing comparisons with rare historic photographs, we visit the scenes as they are today.

Our tour extends from the bustling big cities of Birmingham and Coventry to delightful remote rural stations and encompasses listed Victorian buildings, stunning viaducts, and a line which was crossed by the longest canal aqueduct in England. There is a special feature on the railway scene at Stratford-upon-Avon, as we call into the town’s railway museum. We also take a ride on the Shakespeare Express, a steam-hauled train which runs from Birmingham Snow Hill to Stratford and we also visit the charming Echills Wood Miniature Railway.

This special tour of Warwickshire, based on the book by Colin Maggs, is packed with interviews, fascinating location film, maps and excerpts of wonderful archive film.