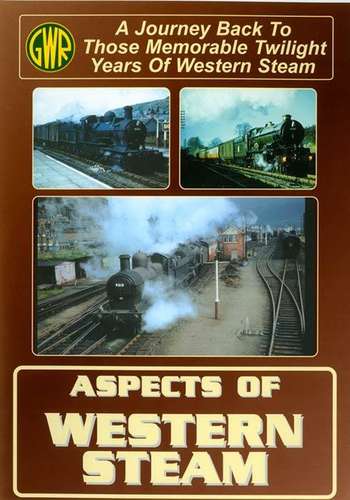 A journey back to those memorable twilight years of western steam, in which we look back at various former GWR classes at work during the 1950s and 1960s.

The DVD includes some invaluable archive footage, beginning with the Dukedogs and concluding with the Kings in their twilight years.

In Wales on summer dated trains, on the delightful line from Ruabon to Barmouth via Llangollen.

In addition we see the last members of the class at Croes Newydd being prepared for service.

Seen in action behind various Dukedogs at a number of locations including Shrewsbury, Towyn, Machynlleth and Ruabon.

Finally 'Earl of Berkeley' is featured in action on The Bluebell Railway in Sussex during the line's early years.

A Pilgrimage to Swindon:

Rare archive film of two specials to Swindon; one during the early 1960s behind a King, the other behind 'City of Truro' in the late 1950s.

Plus archive footage with glimpses of Swindon's famous works is featured and the last Kings in service during 1962.

The Paddington To Reading Line:

A portrait of the route during the steam era using rare exclusive colour film taken in the period 1960 - 1962.

Locations include Paddington, Hanwell, Southall, Reading and Didcot with a wide variety of motive power action.

The Gateway to Wales:

A wealth of rare and exclusive film showing steam at work around Ruabon and Shrewsbury, includes Counties, Kings and Manors on passenger and freight duties.

Preserved Great Western steam on the mainline and preserved network including 'City of Truro'.