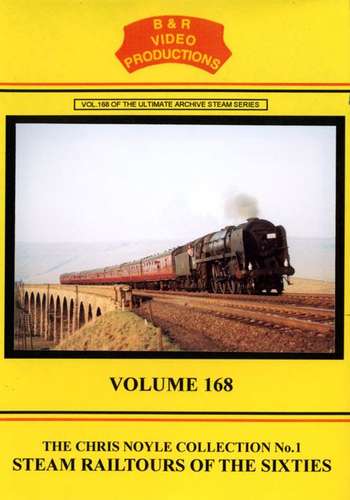 The Chris Noyle Collection No.1.

Chris Noyle filmed railways in Britain and Europe from 1962 to 1972. This is the first part from his collection and features rail tours in England during the period 1964 to 1967. The area covered was from south to north including some long closed lines and using locomotives often to be withdrawn as the last in their class. And often a single tour would involve many changes of motive power.

With footage from a variety of railtours, and many steam hauled normal service trains in the background, we visit the Weymouth Quay Tramway for 13xx panniers, the Bluebell line in the early preservation years, Kings Cross and the ECML with a double-tendered 4472 “Flying Scotsman”, Westbury, Nottingham Victoria, the Settle & Carlisle, Waterloo and Sussex. More scenes and Wellingborough, Higham Ferrers, Northampton Bridge Street, Kettering, Spondon, Derby and a 4F on the Wirksworth branch.

Also featured are tours in the Thames valley including Witney and to the north, Haydon Bridge with ex-LNER 62007, Newcastle with a V2 and passing green NE electrics. Among other locations and lines visited are Weymouth with A4s, Yeovil Junction, Eastleigh, Swanage, Bridport, Ilfracombe, Highbridge with two Ivatt 2-6-2Ts, Bath Green Park with two unrebuilt WC pacifics and the Isle-of-Wight. Are some of the Ventnor scenes a model? No, they are very real! Locomotives used include ex-GWR Panniers, Prairies, Halls & freight 2-8-0s, ex-Southern S15s, U Class 2-6-0s, Q1 and Bulleid pacifics, ex-LMS 3Fs, 4Fs, Patriots, Jubilees and Black 5s, ex-LNER J11, V2, A3 and A4 pacifics and even a B16. Also many BR Standard types including Britannias, 9Fs and the last one of all, 92220 “Evening Star”. A veritable variety!

We conclude with rail tours in and around Manchester, Carnforth and the North West during the dying days of steam between 1967 and 1968.  A mixture of 8Fs, 9Fs, Standard and Black 5s, Britannias and Standard 4 2-6-0s are seen in normal daily service as the rail tours pass by.

Chris always used Kodak colour film. This has served the test of time and all of the footage is in wonderful colour. An authentic sound track has been added along with an extensively researched commentary.