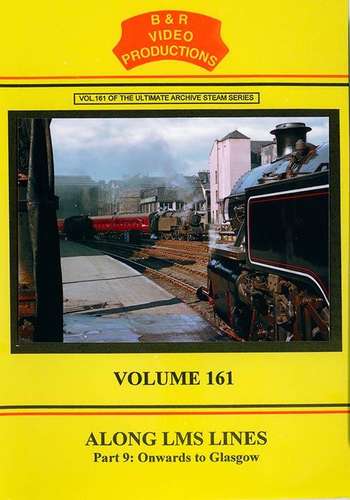 Our series of films along the West Coast Main Line has nearly come to an end, reaching Glasgow Central this time.

However, we start at Stockport with 70013 “Oliver Cromwell” in April 1968 before moving on to Preston in 1965, the stepping point for a visit to Blackpool Central just before it closed in 1964, with views of the shed there.

We return to Preston to travel north again over Shap to Carlisle. Another way to Carlisle is via the Settle and Carlisle route and we show scenes from this line using previously unused new footage. At Carlisle, there is extensive coverage of lines and locomotives including a visit to Kingmoor shed. Many engine classes are seen including Princess Coronation Pacifics, Royal Scots, Jubilees, Black 5s and BR standard types such as Class 5s, 9Fs, Britannia and Clan Pacifics.

Onwards and we visit Dumfries on the old G&SWR route before returning to the West Coast line over Beattock including scenes from the footplate as we reach the summit. Preserved Highland Goods 4-6-0 No.103 is seen on the Inches branch before we finally reach Glasgow Central.

An all colour film with excellent detail and locations, mastered with an authentic sound track and an extensively researched, detailed and informative commentary.