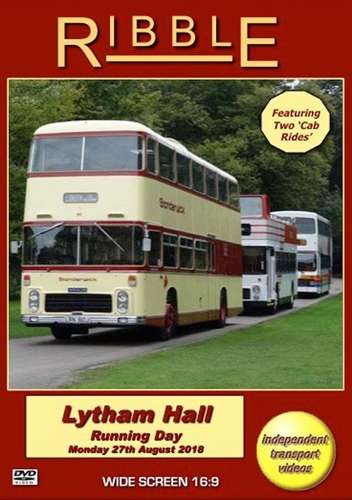 The independent transport videos cameras have again been invited back to record the Ribble Preservation Trust’s fifth Lytham Hall Running Day that took place on August Bank Holiday Monday, 27th August 2018. As usual the event was centred on the magnificent Georgian Grade 1 listed Lytham Hall and it’s beautiful grounds, offering a superb backdrop to the fine vehicles owned by the Trust as well as the visiting vehicles. As on our previous programmes of this event, the filming begins early in the morning at the RVPT’s Freckleton depot as we see the participating buses and coaches starting up and inching their way out of the depot for a busy day in service. This year we have changed the format of our programme. So, we jump in the cab of the beautifully restored 1934 Leyland Lion LT5A, in the rich blue livery of Lytham St Annes Corporation for the driver’s eye view of the journey through the deserted roads and streets to Lytham Hall. On arrival at the Hall we begin to see the arrival of vehicles taking up their positions, giving us a chance to have a good look at them as they manoeuvre into place. As in previous years a ten-minute service was operated from the Hall to St Annes, via Lytham town centre and Fairhaven Lake.

Our next location is in Lytham town centre on Clifton Street and Central Beach, where we see the buses in action along with some of the new Blackpool Transport ADL Enviro400 City double-deckers. If you are fan of these magnificent new buses they can be seen in more detail on our recent DVD programme “Blackpool’s Buses 2017 & 2018”. From the busy streets of Lytham our next location is St Annes Square in the centre of St Annes. Here we observe the preserved vehicles in action as they arrive and depart with good passenger loads. The most poignant sequence is of Lytham St Annes Corporation number 10 (JTD 381), the 1948 Leyland Titan PD2 as it runs through the streets that it had done so many times before whilst in it’s service days! We return to Lytham Hall on board the superbly restored Leyland Atlantean AN68/1R, 1397 (NRN 397P), which has a Park Royal body in the poppy red livery that Ribble buses wore during the National Bus Company days. On arrival at the Hall we see the comings and going of the buses as they pick up and deposit the crowds enjoying the event in this lovely setting. We also film along the long driveway leading to the Hall and at the grand entrance arch near to Ballam Road where there is also plenty of action to observe.

Towards the end of the day, we see the buses depart from the Hall for home, including a lovely Bristol ‘L type’ from the West Yorkshire fleet and many other visiting preserved buses and coaches. Our return to Freckleton depot is in the height of luxury! We place our camera in the cab with the driver of Standerwick 60 (LRN 60J), the 1971 Bristol VRL/LH6L with ECW CH60CT bodywork. This huge double-decker coach would have been used on services from the northwest of England to London along the M6 and M1 motorways. It has a toilet, a large luggage area and sumptuous seats. This short journey should give you some idea what travelling on one of them was like. On arrival at the depot we film the vehicles being put away at the end of a perfect day and say thank you to the Ribble Preservation Trust for providing an excellent event, which we hope you will enjoy on this programme.