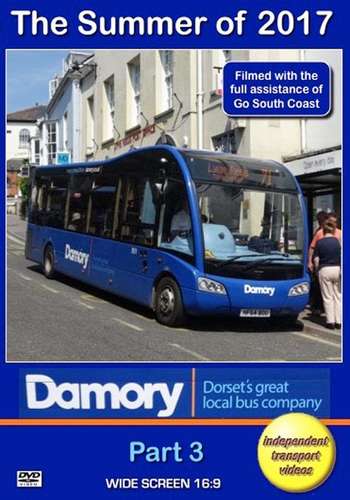 This, the third programme in our Damory DVD trilogy was filmed throughout the summer of 2017 covering the Damory network. Dorset was once served by an extensive rural bus network operated by not only the large companies - Hants & Dorset, Wilts & Dorset and also Southern and Western National, but also a rich diversity of small and not so small independent operators - Bere Regis & District, Stanbridge & Crichel, Dorset Queens, Victory Tours and House of Hilton to name but a few. Over a period of time from 1993 to 2017 and for many reasons, Damory Coaches became the operator of a great many of these services, which made up a fragile tracery. This film is a tribute to the towns, villages, hamlets and staff who operated these routes over many years. The Damory tag line “Dorset’s great local bus company” is shown to good effect as the cameras of independent transport videos capture the depth of the Damory operations. At its peak buses could be found in Ringwood – Hampshire, Salisbury – Wiltshire, Yeovil – Somerset, Lyme Regis – nr. Devon and a great many places in between. From the Jurassic Coast to hilltop towns and from urban operations to single track roads Damory has provided these services by a rich diversity of vehicles from 8 to 80 seaters. Board the bus as we travel from Monkeys Hump, Heavenly Bottom, the Piddle Valley and Fontwell Magna. Truly a bus company that always took the road less well travelled.

The filming on this programme begins at the main Damory bus depot at Pimperne. We have a good look around at the buses allocated there before joining Optare Solo 3774 (YN04 LWX), to travel to Ringwood. From here we ride on the 315 service to Wimborne where we catch up with other Damory buses. Routes 88 and 320 are captured around the pretty Dorset lanes. Further locations include Blandford, Shaftesbury, Sturminster Newton and the small depot at Henstridge. This depot was only used from 2011 to 2017. Our cameras then move onto Sherborne and later catch up with the busy evening activity at Yeovil Bus Station. From Yeovil, our cameras follow the 368 service to Sturminster Newton through the Dorset lanes. Wareham is the next location before taking a ride on a Dennis Dart, 3362 (HW54 DCO), at Wool station and through the pretty lanes and villages of West Lulworth. We also visit Lyme Regis where we see GoAhead, First and Stagecoach vehicles operating together in the same street! Bridport is our location for the final Saturday of operation of most of the rural routes. Our programme finishes in the Poole area where some of the services survive. We hope you have enjoyed your journeys through the beautiful county of Dorset provided by this remarkable bus company.