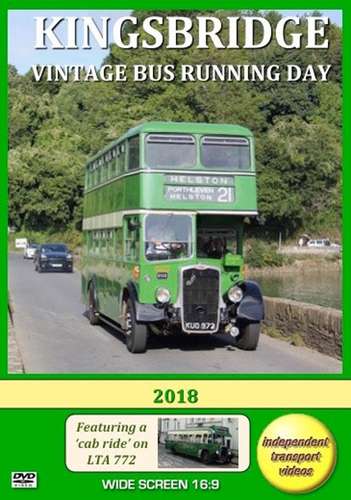 Organised by the Thames Valley & Great Western Omnibus Trust, the ‘Kingsbridge 7’ 6” Vintage Bus Running Day’ is now in its eleventh year. In the past the event just featured buses and coaches built to that width due to the narrow lanes, but in recent times larger vehicles have joined the ranks of superbly turned out buses and coaches that operate in and around the area of the pretty town of Kingsbridge in Devon on one Saturday in September. 2018 was the first year that the independent transport videos cameras have attended the event to record over 40 preserved buses and coaches in action.

The day starts at the centre of Kingsbridge where our cameras record the arrivals and departures of the buses and coaches at the small bus station. There is a myriad of vehicle types and bus companies represented, as you will see on this programme. For example, double-deckers are represented by Leyland Titans, Atlanteans, Bristol K types, Lodekkas, VRTs and a Dennis Trident. Single-deckers include a Leyland Tiger TS7, Leopard, AEC Regal, Reliance, a rare Bristol H type and many Bristol L types featuring both bus and coach bodywork, Bristol SUs with ECW bodywork and Bristol LHs with a variety of body types and sizes! A modern Dennis Dart and Optare Solo are also seen together with a beautiful rare Tilling-Stevens with Scottish Aviation bodywork. Our cameras take a ride on JA 7591, a 1937 Leyland Tiger TS7 with English Electric B35C bodywork to Thurlestone and back to Kingsbridge. We then have real treat for you.

We take a cab ride in Western National 1613 (LTA 772) a 1951 Bristol LWL5G with ECW B39R bodywork on service 92/93 to Modbury and back to Kingsbridge. You will experience the sights and sounds from the bus driver’s point of view. Superb scenery and narrow lanes is the order of the day - you will not be disappointed! Another ride is taken onboard 959 (KUO 972), a 1950 Bristol K6B with ECW L55R bodywork on a short run to Frogmore and back. Filming concludes at the bus station as the final buses arrive and depart for home ending a most enjoyable day. A big thank you to Colin Billington and his team for organising this event.