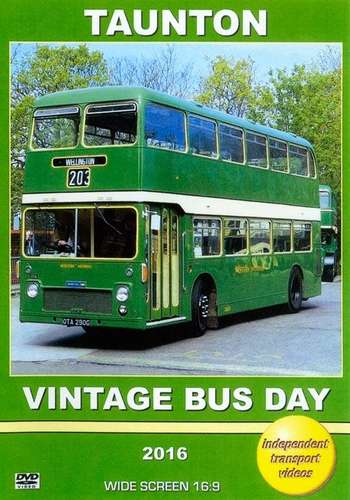 The Taunton Vintage Bus Day has now established itself as one of the leading running days in the UK buses rally calendar. This is the third visit by the independent transport videos cameras to this event based at the Art Deco style bus station in the Somerset town of Taunton on Sunday May 8th 2016. Our cameras are out and about bright and early in the morning as the vehicles begin to arrive in glorious spring sunshine. Castle Green is the location as we see a superb line up of vehicles representing fleets from North Western, Crosville and Stockport, Huddersfield and Bournemouth. Also present is a Leyland Titan PD2 in the livery of Scout Motor Services. We also see a line up of mostly former Tilling fleet vehicles in the bus station, with buses from Western and Southern National, the Bristol Omnibus group of companies, Crosville and Royal Blue just to name a few! Filming now starts in earnest, with a variety of locations for you to enjoy. These include Castle Way, Tower Street, Corporation Street, Fore Street and of course the Bus Station. Our cameras jump between locations, and they are subtitled on the programme to help you identify them if you are not familiar with Taunton.

We take a ride on board 18 (RTC 822), a Leyland Titan PD2/12 with Leyland H56R bodywork. This bus was originally owned by Rawtenstall Corporation, but has been restored and painted in the interesting livery of red, ivory and black as used by Scout Motor Services from the north west of England. This ride out was for a photo shoot for the popular enthusiast magazine, ‘Bus & Coach Preservation’.

The present day bus operator in Taunton is ‘First’, who’s buses are painted in a smart two-tone green livery and branded ‘Buses of Somerset’. To tie in with the event their garage on Hamilton Road was open to the public and our cameras made a brief visit there. From the garage we return to the bus station in Taunton on board 1056 (OTA 290G), a Bristol VRTSL6G with an ECW H70F body. Formally owned by Western National, this bus spent most of its working life in Plymouth and is now restored to ‘as new’ condition. Now back in the town we do further filming on Castle Way, Corporation Street and Tower Street concluding at the Bus Station. This event certainly has a good variety of buses and operators from the past represented. Apart from the fleets mentioned above, you will also see buses representing Barton, Bere Regis & District, Caerphilly UDC, Damory, Devon General, Exeter Corporation, Mendip Mule, Thames Valley and West Riding! Quite a list, so sit back and enjoy the experience.