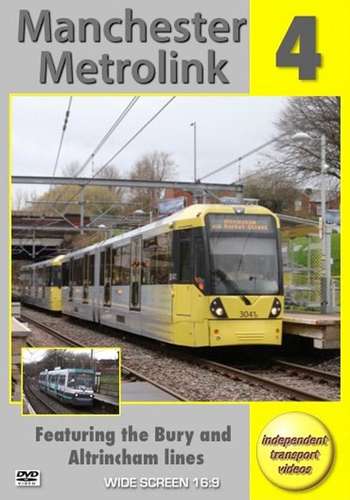 This is the fourth DVD programme to feature the Manchester Metrolink light rail system from the cameras of independent transport videos. Manchester Metrolink opened in 1992 with a 19-mile route that ran from Bury to Altrincham via Manchester city centre using former railway lines inherited from British Rail. In view of this all stops were constructed to mainline railway platform height.

Initially there was some 3km of street running from Victoria station to Piccadilly station, but this has now been extended as the system has developed. Major extensions to the network began in 2009 and by 2014 the trams also served Rochdale, Oldham, Ashton-under-Lyne, East Didsbury and Eccles. In late 2014 the trams reached Manchester Airport and in early 2015 the area of Victoria station used by the trams was completely remodelled. Work also began on the second city crossing (2CC) and this opened during March 2017. The fleet now consists of 120 Bombardier M5000 trams, which are 2-section bi-directional cars manufactured by Bombardier in their factories in Bautzen, Germany or in Vienna, Austria. Although the trams may all look similar, trams 3001 – 3060 can be used throughout the system as they are fitted with an automatic tram stop system, but trams 3061 – 3120 do not have this system so can only be used on the Ashton-under-Lyne, East Didsbury, Manchester Airport and Rochdale lines. All of the trams operate in a yellow and silver livery.

The lines featured on this programme are the lines to Bury and Altrincham. Our cameras travel on the trams and alight at various stations to capture the trams running through them to build a picture that shows just how diversified the Manchester Metrolink system is. We begin at the Piccadilly Metrolink stop, which is situated under the National Rail Piccadilly station and travel on tram 3035 to the remodelled Victoria station. This is a major interchange linking Metrolink and National Rail and it is here we begin our journey to Bury. This line makes use of the former heavy rail line, now converted to light rail use. We travel on four different trams, some operating in double formation (4-car), as we travel along the route to Bury, making stops at the following locations to film the trams in action: Queens Road, Bowker Vale, Prestwich, Besses o’ th’ Barn and then the terminus at Bury. We then board tram 3158 + 3018 for the journey from Bury through Manchester city centre to Altrincham, getting the driver’s eye view along the route. Like the Bury line, the Altrincham line makes use of the former heavy rail line converted to light rail use. The terminus at Altrincham is of great interest as it is shared with the National Rail station and just outside there is a bus station. The station building and platforms show off their former British Rail heritage and are maintained to a very high standard. We film the trams as both ‘heavy rail’ passenger and freight trains pass through the station adding interest to our programme. We then travel on tram 3050 + 3029 to the nearby Navigation Road and here we see the trams and trains interacting at this busy station. Here you will see trams running in both directions on the same track, and on the other track you will see ‘heavy rail’ trains doing the same! From here we stop for more tram filming at Sale and Old Trafford concluding at Piccadilly. Our programme finishes with a selection of photographs of the T68 trams, pioneers of these lines!