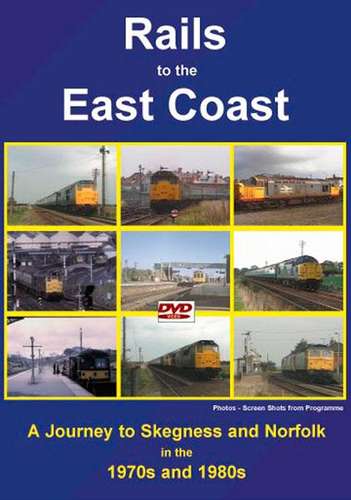 Two films featuring journeys by rail to the East Coast in the 1970s and 1980s plus archive film from East Anglia in the late 1970s.

Rails to the Sea - A film made in 1989 comprising a journey from Grantham to Sleaford.  Features the stations and motive power along the way including Boston, Sleaford and the signal boxes along with their traditional signalling including somersault signals. Passenger and freight traffic feature with a variety of first generation DMUs and diesel traction.

Motive Power Survey - Loco Hauled passenger trains to Skegness in the late 1980s with Class 20s, Class 37, Class 31s and Class 47s at a variety of locations along with a Class 45 hauled special.

East Anglian Railrover - A film made in 1979 comprising a journey from Kings Cross to Sheringham via Hitchin, Cambridge, Ely and Norwich and featuring a wide range of motive power of the period. This was one of the first railway programmes released on VHS format in 1983 and provides a fascinating glimpse of a bygone era.

East Anglian Railscene - A collection of film taken in 1979, comprising the East Suffolk Line, the Wherry Lines, the Cross Country routes and the Norwich and Ipswich Main Line.