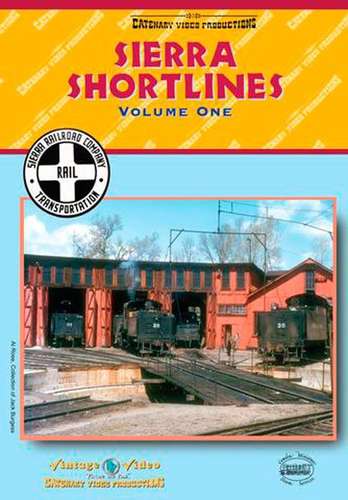 This DVD covers the legendary Sierra Railroad from 1947 to 1973.

This still runs through bucolic surroundings in the Sierra foothills and has long been a favourite place for Hollywood film shoots. The most famous film shot on it was ‘High Noon’, but episodes of ‘Petticoat Junction’, ‘Bonanza’ and ‘Rawhide’ were also shot on its rails, along with many other films and TV programmes.

Locomotives seen in action include ‘film-star’ No. 3 and mallet No. 38, largely on freight, but also fan trips.

The Sierra was also the rail outlet for the Pickering and West Side logging railroads featured in individual DVDs we offer, and a number of Pickering’s Shays are now preserved at the Railroad 1897 Historic Park located in the Sierra RR’s old roundhouse. The line itself continues to move freight - not shown in this interesting film.

Click here for the second volume of this title 'Sierra Shortlines: Volume Two'.