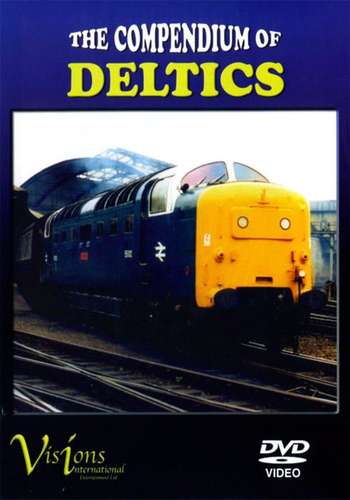 The fourth volume of our popular Compendium series features the legendary Class 55 Deltics. Footage of the BR years from the early 1970s to the early 1980s delivers an instant nostalgia fix, and unlike other programme’s in this series it features 100% archive footage.

Meet The Cast - Includes all twenty-two locos with footage taken between 1973 -1981.
Named Trains - Featuring; The Flying Scotsman, The Talisman, The Aberdonian, The Leeds Executive and The Silver Jubilee.
Under The Wires - Footage from the electrified section between Kings Cross to Hitchin.
Light Engines - Deltics at speed on their own!
White Cabs - Finsbury Park's six racehorses that received an extra embellishment.
Selby Saturday - Deltics at Selby in 1975.
Tours - A selection of tours between 1978 and 'The Farewell'
King's Cross '73/'74 - 9xxx numbers and headcodes prevail as does the old signal box and plenty of crests on the regiments.
The HST Age - Footage from 1978 to 1981 as the class lost it's premiere status.
Pullmans - Working on prestigious Pullman services including, The Tees-Tyne, Hull and Yorkshire Pullmans.
The Heyday - Footage from 1973-1975 highlighting a period when the Deltics were dominant on the East Coast services.