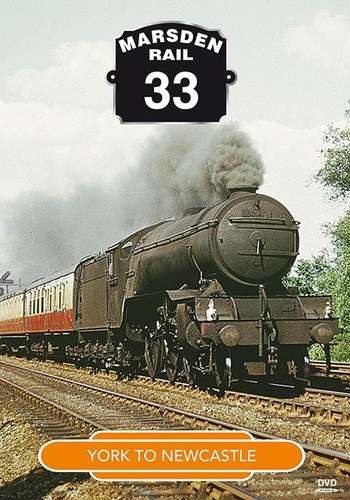 This programme continues the northward journey of Marsden Rail Volume 32 from London’s King’s Cross Station and features the East Coast Main Line, in addition to several branch and secondary lines that served the York to Newcastle route.

The first location is York, with film taken between 1945 and 1965 illustrating why the city held such an attraction for railway enthusiasts. Even in the early 1960s, an immense variety of motive power could be found with expresses headed by ex-LNER ‘Pacifics’, along with numerous steam-operated freight workings. Early diesel types also contribute to the mix of traffic that gave the city’s railways their unique appeal.

Next is Darlington, with its two stations, locomotive works and steam depot reflecting the town’s importance as a major rail centre, which was still evident in film taken in the 1960s. A journey on board a DMU from Darlington to Bishop Auckland in 1965 is followed by journeys to Middleton-in-Teesdale, Barnard Castle and Kirkby Stephen over the long lost Stainmore Route.

Continuing north, scenes at Shincliffe on the Leamside Line are followed by film taken at Durham in 1962, with a variety of ‘Pacifics’ and Type 4 diesels competing for ECML workings.

After scenes at Low Fell and Bensham on the approach to Newcastle, Central Station, Gateshead Depot, Manors and Heaton Junction feature – together with trolley buses in the city centre. Once again, film taken in the 1960s shows steam in charge of most workings, from J72 and V3 tank locomotives on empty stock workings to V2s, A1, A3 and A4 ‘Pacifics’ on main line workings.