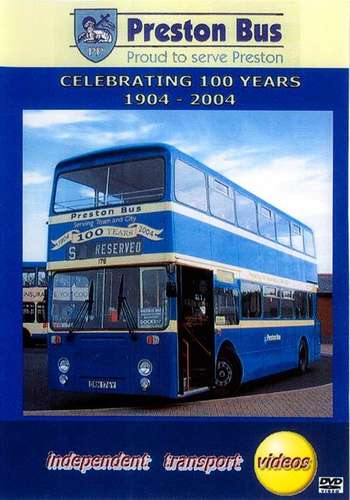 2004 saw the centenary of public transport in Preston and to mark the occasion we took our cameras to the city where we had unrivalled access to the present day operations of Preston Bus Limited. The company is unique as it is the only former local authority operation sold to employees in the early 1990s that remains privately owned by its management and employees. It is a delight from the enthusiast's point of view as more than a dozen Leyland Atlanteans purchased new in the 1980s remain in service, as do Leyland Lynxes dating from the late 1980s/early 1990s. However there is also a distinctly modern image to the company's fleet of over 120 vehicles with low floor Tridents and Solos introduced from 1999/2000 onwards to enhance a number of existing routes into 'Super Routes' with more intensive services, new bus stops and bus priorities to speed up journey times. These routes form part of a Quality Bus Partnership with Lancashire County Council and Preston City Council, and Preston Bus is proud to have been the first bus operator in Lancashire to introduce them.

Further innovation has seen the introduction of Real-Time Passenger Information with displays at over 80 bus stops throughout the city and a new orbital route will shortly be introduced as a result of a 'Kickstart' award from a successful Urban Bus Challenge bid. Looking a little further ahead, the company is one of only three operators in Europe to benefit from the 'Civitas' initiative that will see seven hybrid double deckers take to the streets of Preston in an effort to further reduce pollution.

We go behind the scenes at Deepdale Road Depot and view the workshops and bodyshop; see the bus wash in action and enjoy the afternoon run-out with Olympians and Atlanteans leaving for school journeys. Then jump aboard Atlantean 152 (GFV 152W) for a trip along many Preston Bus routes and see Tridents, Lynxes, Metroriders and Solos in action plus some Atlanteans in all day service!

Our cameras then move to the city's bus station where, from the integral multi-storey car park, we get a birds-eye view of afternoon peak services. The bus station, which was built in 1969, is scheduled to close once a new station has been built as part of a large redevelopment plan for the city centre.