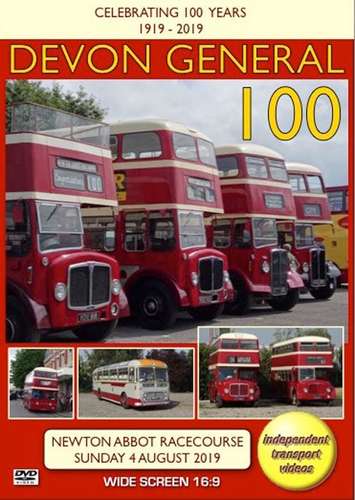 The Devon General Omnibus and Touring Co. Ltd was formed in 1919, and on Sunday 4th August 2019 100 years later, a superb event was organised by ‘The Devon General Society’ to celebrate the occasion at the racecourse in Newton Abbot. Stagecoach South West – the current operator of buses in the former Devon General area, supported the event. The independent transport videos cameras were on hand to record the celebrations for you, beginning on Saturday evening as some of the vehicles began to arrive. The first arrivals were a number of Devon General vehicles, mostly of AEC manufacture. Of particular interest was DR705 (ETT 995), an AEC Regent rebuild known as a ‘Light-six’, the chassis dating from a 1937 AEC Regent double-decker and the engine and running parts from a single-decker AEC Regal of 1938. The unique lightweight double-decker body was built by Saunders-Roe in 1953. Other buses seen were newer AEC Regents and a Leyland Atlantean open-topper from the famous ‘Sea-Dog’ class. More recent double-deckers were Bristol VRTs and a Leyland Olympian.

Our filming begins on Sunday morning as the rest of the visiting vehicles begin to arrive. Both preserved and contemporary buses are seen arriving including Stagecoach South West’s 15893 (WA13 GDX), a Scania ND230 ADL Enviro400 double-decker painted in a special ‘Devon General 100’ commemorative livery. Apart from the vehicle displays, five services were operated to surrounding towns and villages as well as Newton Abbot railway station. Our cameras travelled on five vehicles for you to soak up the atmosphere of bus travel in days gone by. These were DR817 (VDV 817), a 1957 AEC Regent V with a Metro-Cammell body on service 1 to Chudleigh and returning to the racecourse. 872 (872 ATA) was the first rear-engine bus bought by Devon General being a 1959 Leyland Atlantean also with a Metro-Cammell body on service 36 to the railway station. Our cameras return to the racecourse on DR679 (NTT 679) the 1952 AEC Regent III with the unique Weymann ‘Aurora’ bodywork. Our next ride is onboard Stagecoach 19992 (LRV 992), a 1956 Leyland Titan PD2 with an open-top Metro-Cammell body. Painted in Devon General livery this bus began life with a closed top running for Portsmouth Corporation and it is now part of the Stagecoach Heritage Fleet. We travel on it to Teignmouth on service 2 and take the opportunity to film some of the other buses running that service at this lovely seaside resort. Our return to the racecourse is onboard 559 (ATA 559L), a Bristol VRT/SL6G with an ECW body dating from 1973 that has been converted to open-top. This bus is currently in the Southern National livery it wore when operating in Weymouth, but when new it was operated by Devon General. At the racecourse, our cameras record all the final service departures and see the buses and coaches departing for home. A truly remarkable event. Well done to all that organised it and we hope that you enjoy our record of the day on this DVD programme.