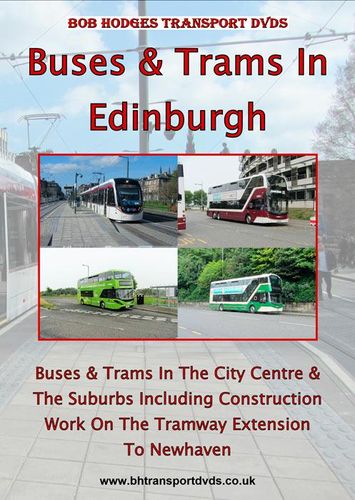 The bus fleet is pretty much standardised on Volvo chassis with bodywork by Wrightbus and Alexander-Dennis although there is a batch of Volvo BRLE single Deckers with MCV Evo-Ra bodies built in 2021. There are also 50 Volvo 7900H Hybrid single deckers built in 2013/14. Also noteworthy are the 78 Volvo B8L Tri-axle double deckers with Alexander-Dennis Enviro400XLB bodies, 64 of these buses seat 100 passengers, the remainder seat 81, 10 of these are in the blue Airlink livery, the other 4 are in plain white. Lothian took delivery in 2021 of 4 BYD/Alexander-Dennis Enviro400EV battery-electric buses in a distinctive green livery, these can be seen on route 10. Lothian Buses operates through several subsidiary companies, using different liveries for each operator: The buses that operate throughout the city and it's suburbs are in the madder and white which is a modernised version of the Edinburgh Corporation livery. East Coast Buses operate to the East of the city out as far as Dunbar and North Berwick, these are former First Group routes taken over in 2016, the current livery is green and grey. Lothian Country operates routes to the west of the city to Livingston and Bathgate areas and their livery is green and cream. The tour bus routes are in various liveries, Lothian brands include Mac Tours, Majestic Tours, Edinburgh Tours and the franchise for City Sightseeing, the Bright Bus Tours brand is owned by First Scotland East. Lothian also have a coach division called Lothian Motorcoaches, there are both single and double deck vehicles in the fleet which is in a plain grey livery. First Scotland East operates several routes into the city, there is a variety of route branding and fleet names: First West Lothian, First Midland Bluebird can be seen. Stagecoach Scotland East also have several routes including some express routes, the coaches on these routes are currently having their livery changed from the standard Stagecoach colours to the new orange 'distance' livery. Parks of Hamilton is an important coach operator providing vehicles for the Scottish Citylink services. Borders Buses (owned by Craig of Campbeltown) provides services to the Peebles and Galashiels areas plus the Borders area.

Part 1: Buses, coaches and trams in Edinburgh City Centre.
Part 2: Buses and trams in the suburbs including Leith, Portobello and Newhaven.
Part 3: Edinburgh sightseeing buses in 2005, mostly Routemasters.
Part 4: Views of the construction works of the tramway extension to Newhaven.

Subtitles, no commentary, enjoy the sights & sounds of buses & trams in Edinburgh.