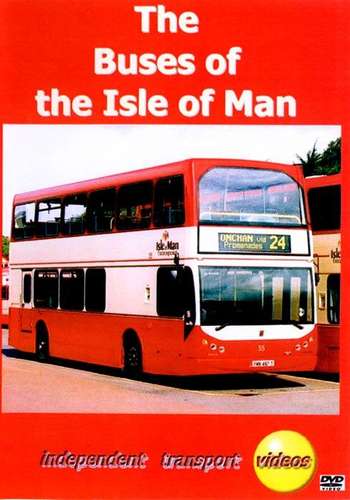 The current Isle of Man Transport fleet is very modern and smart. Double deckers are represented by low-floor Dennis Tridents and DAF DB250s with East Lancs bodies, except for three supplied by Optare. There are also Leyland Olympians with ECW, Leyland and Northern Counties bodies. Single deckers consist of 25 Dennis Darts bodied by Marshall in 1997.

The Island is a picturesque place and looks very much like England, but it is self governing and as such not part of the United Kingdom. This DVD shows the current scene. We start at the Douglas Ferry Terminal to see the buses in operation and then onto the Promenade, a focal point for most of the visitors to the island. There is no longer a bus station in Douglas, but all the buses congregate by smart new shelters on North Quay and in Lord Street. Here we witness the Friday evening rush and a more sedate, but busy Saturday afternoon.

The Isle of Man is also famous for the Manx Electric Railway. We spend some time at the terminus to see a tram leave and some of the comings and goings of the equally famous horse trams. We also pay visits to the busy towns of Ramsey and Peel to see the bus operations.

Our cameras then travel by steam train from Douglas to Port Erin. We go via Santon and due to essential railway maintenance we connect to Castletown by coach. From Port Erin we travel by DAF double deckers via Castletown and back to Douglas.

There is a Photo Gallery of Douglas Corporation and Isle of Man Road Services vehicles taken in May 1976. It shows the many AECs and Leylands operated by both undertakings during that period. In October 1976 IOM National Transport was formed merging both companies.

A fascinating programme if you like smart modern fleets with an interesting history and heritage of how buses used to be!