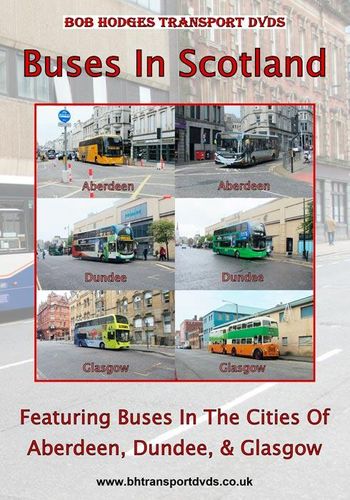 This DVD features buses in action in three cities in Scotland, Aberdeen, Dundee and Glasgow. All three cities have a rich transport history with Glasgow at one time having by far the largest tramway system in Scotland. Aberdeen and Dundee also had somewhat smaller tramway systems, all were however converted to motor bus, and in the case of Glasgow, a small number of trolleybuses, by September 1962. Today the descendents of the Corporation transport systems live on in the form of First Aberdeen, Xplore Dundee and First Glasgow. This DVD is divided into three parts:

Part 1 - Aberdeen: First Aberdeen operate the local bus routes in the city and Stagecoach North Scotland run the interurban routes connecting Aberdeen with the surrounding towns and villages. Stagecoach also operate long distance coach services to and from the city. Aberdeen is also the HQ of the First Group, their head office is at the large bus garage on King Street. First Aberdeen operate some unusual buses, there are Alexander-Dennis Enviro500's tri-axle double deck buses that started life with First Glasgow in 2009, some hybrid single deck Enviro300's which can be distinguished by the battery pod on the roof, and a batch of Wright Streetdeck hydrogen fuel cell buses of which 10 are route branded for route 19, Culter - Tillydrone. Many First Aberdeen buses are route branded with different coloured front ends and the rear in dark green rather than the standard First Group purple. Stagecoach also use route branding and at the time of filming the new Stagecoach liveries were being applied.

Part 2 - Dundee: Local bus services in Dundee are operated by Xplore Dundee, this company was originally owned by National Express but was sold to McGill's Bus Service of Greenock in December 2020. Most buses are in 2 shades of dark green livery but a new livery of 2 shades of lighter green can be seen on recently delivered buses. Stagecoach North Scotland operate interurban bus and coach services to and from the city from their bus station in Seagate. Buses from the independent Moffat & Williamson, who are based in Fife, also operated a couple of routes in the city.

Part 3 - Glasgow: City wide bus services in Glasgow are mainly operated by First Glasgow from 5 garages in the Greater Glasgow area, the largest is Caledonia which can accommodate up to 350 buses. There is quite a lot of route branding, as in Aberdeen different coloured front ends of the buses denotes the route that it is operating on. Other operators in Glasgow include McGill's of Greenock, Glasgow Citybus, a subsidiary of West Coast Motors who also run the Inter-Station bus service, and Stagecoach West Scotland. Interurban and long distance coach services are based at the large Buchanan bus station. Glasgow is also home to the Glasgow Vintage Vehicle Trust museum, based at the former Bridgeton bus garage. The museum has a large collection of buses and coaches, a visit to the museum is included in this chapter, vintage Glasgow buses also provide a service to the museum on open days.

Subtitles, no commentary, enjoy the sights & sounds of buses in Aberdeen, Dundee & Glasgow. 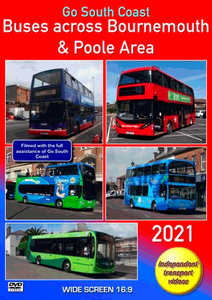 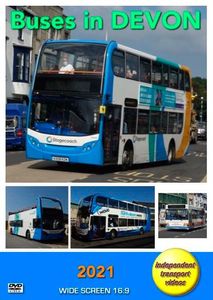