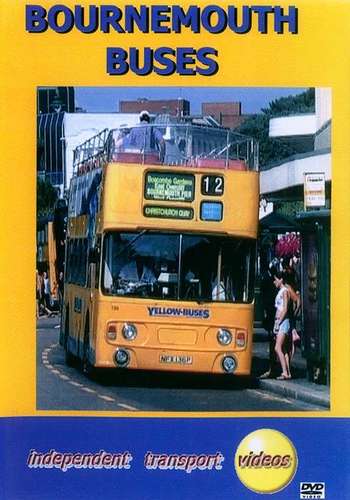 The seaside resort of Bournemouth on England's south coast has always held an interest for the bus enthusiast. Even today the local bus company owned by Bournemouth Borough Council branded as 'Yellow Buses' offers the follower an interesting mix of vehicles, from 25 year old Alexander bodied Leyland Fleetlines to the very latest Volvo B7TL bodied by Wrightbus in their Ballymena factory in Northern Ireland. Single deckers are represented by Dennis Lance and Darts with three variations of East Lancs bodywork.

This DVD programme, filmed mostly during the hot summer of 2003 shows all types going about their daily duties. We start early in the morning at Mallard Road depot seeing the vehicles leaving to start work. Our cameras then take up various locations around Bournemouth central area and some of the suburbs. 2003 could be the last season for the convertible Leyland Fleetlines, so we follow the remaining examples in service on route 12 along the East Cliff, Boscombe, Hengistbury Head and also at the other end of the route at Sandbanks. Our cameras also ride on the route, so you can relive the joys of riding an open-top bus at a traditional seaside resort! The Fleetlines contrast nicely with the new convertible East Lancs Volvo B7TLs!

Nostalgia is provided by the cine camera of Richard Newman as we get a superb reminder of the days of the Bournemouth Trolleybus.

We then have a brief look back at 1999 recalling some of the vehicles that have recently left the fleet. The programme finishes with a Photo Gallery from 1993 and 1995.

If you are looking to see a smart fleet with variety set in a most picturesque part of England, then this is the DVD for you!