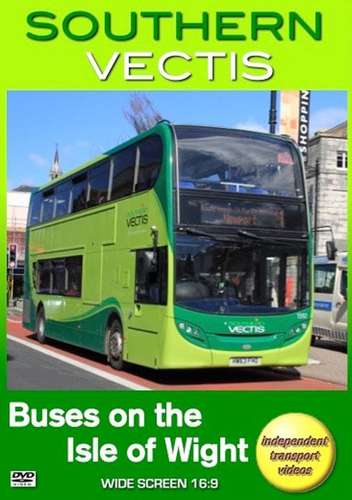 The independent transport videos cameras are no strangers to the Isle of Wight. Indeed our first UK video programme was filmed on the Island - ‘Ride on the Isle of Wight’ - back in 1999. This present DVD programme looks at the operations of the main bus operator on the Isle of Wight - Southern Vectis. Now part of the GoAhead group this former Tilling Group and National Bus Company (NBC) subsidiary has been operating on the Island since 1929, always in a green livery in some form or other. This DVD programme contains footage from the years of 1978, 1989, 2013, 2015 and 2020. 1978 represents the NBC years, 1989 the early deregulation years and from 2013 to 2020 the GoAhead years.

The programme opens with scenes shot in Ryde, Sandown and Shanklin on cine film, with Bristol Lodekkas and VRTs being the main stars of this section. The 1989 footage is filmed at Ryde, Shanklin, Newport, Blackgang Chine, Totland Bay and Ryde Bus Depot. Southern Vectis buses are seen in NBC leaf-green and white livery with the double ‘N’ symbol removed and replaced with the new privatised logo instead. Also the first deregulated livery of emerald-green and sand is much in evidence.  A number of mini-buses in a variety of liveries are seen operating, one being transferred from the recently formed Solent Blue Line based across the Solent in Southampton. At Ryde we see a former Southern Vectis Bristol RE from the long established independent operator Seaview that branded their Ryde to Seaview service as ‘Redlynx’.

Our 2013 filming takes place at Cowes, The Needles, Ventnor, Newport and Ryde. GoAhead is firmly in charge now and the buses are seen in a smart two-tone green livery. At Cowes we see Dennis Darts squeezing through the small archway onto the pontoon on Service 1 from Newport. Look out for Scania OmniCity double-decker 1111 (HW58 ASW), as three days after our filming the rear end of the bus was gutted by fire. It has been rebuilt as a permanent open-topper and re-registered VDL 744 and is named ‘Phoenix’! ‘The Shanklin Steamer’ is seen in Newport. This former GoAhead London Volvo B10B training bus had been converted to semi-open-sided for a circular tour of the Island. It has now left the fleet and resides in the Isle of Wight Bus Museum as a ‘refreshment’ seating area.

The 2015 filming takes place at Newport, Sandown, Shanklin, East Cowes and Cowes. Look out for ‘Vlad the Impaler’ – 023 (A174 VFM) a former Crosville Leyland Olympian that is the company’s tree-lopper! The mainstay of the fleet are Scania OmniCitys, most of which have now transferred to ‘morebus’ and are based at Bournemouth and Poole. We take a ride on open-top Volvo B7TL 1992 (GSK 962), formally registered HW52 EPL, - it can be seen earlier in this programme with its roof in place! At Cowes we see ADL Enviro200s squeezing through on to the pontoon.

In 2020 these little buses operate in Salisbury, Poole and with Damory some still in their green livery. Service 1 to Cowes no longer operates to the pontoon as double-deckers are now used for ‘social-distancing’ due to the coronavirus pandemic. In 2020 we film in Newport, Ryde, Shanklin and Sandown. ADL Enviro400 and the MMC variant double-deckers are the mainstay of the fleet. Vectis Blue buses are also seen, not just on school duties, but operating in normal service. We finish at Ryde St Johns railway station with some Xelabus double–deckers operating a rail replacement service for the Island Line railway in December 2020. We hope you enjoy your visit.