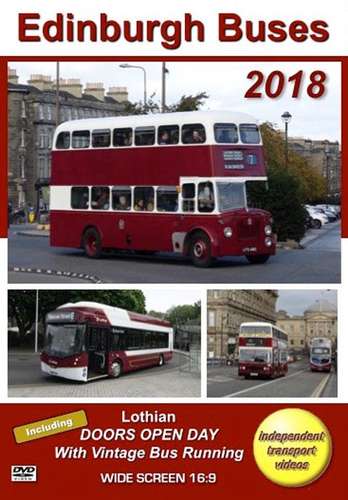 The fast moving contemporary bus scene in Scotland’s capital, Edinburgh seems to change on an almost daily basis! The independent transport videos cameras returned to the city in 2018 on two occasions. The first visit in May, the second in September to take in the ‘Lothian Doors Open Day’ which included a vintage bus running event featuring the heritage bus collection owned by Lothian Buses, operating part of route 7 between Newhaven and Kaimes.

We begin our filming in the beautiful May spring sunshine along York Place, where we see Lothian Buses in service alongside the long distance and inter-urban coaches operated by Stagecoach in both their own and the Scottish City Link liveries. We move around the city to various locations including St Andrew Square, Princes Street, Ingliston Park & Ride, Shandwick Place, Lothian Road and The Mound. Lothian Buses now have a ‘Family’ of brands. They are ‘Lothian’ (main bus operations), ‘EastCoastbuses’, ‘Lothiancountry’, ‘Edinburgh Bus Tours’, ‘Lothian Motorcoaches’, ‘Airlink’ and ‘Skylink’. All have their own distinct brand identity and liveries, which you will see on this DVD programme. Also of interest is that Lothian Buses have purchased a total of fifty Volvo B9TL double-deckers with Wright Gemini bodies from London. These eight-year old buses can be distinguished from their Edinburgh cousins in that they are shorter in length, most have bonded glazing and have been re-registered with ‘LXZ’ registrations.  They also sport a complete refurbishment both inside and out. Firstbus and Stagecoach vehicles are also seen operating as we move around the city. At the time of filming Lothian Buses have a fleet of six electric single-deckers. They are Wright StreetAir EV (Door forward) buses. Our cameras ride on 284 (SK67 FLC) on route 6 to Holyrood. Sounding more like a trolleybus, this could be the future! More filming takes place at Holyrood adjacent to the striking new Scottish Parliament building. Filming continues along the Royal Mile and at North and South Bridge before boarding 556 (SA15 VUG), a Volvo B5LH on route 34 to Leith. Our cameras capture the action at this interesting location before we journey back to the city onboard 211 (SN61 BBX), an ADL Enviro 400H (now diesel) on route 10.

To complete our springtime visit we film along the picturesque Regent Road and again on Lothian Road, Princes Street and St David Street. The September visit begins with a catch up of the contemporary scene as we film on Princes Street and George Street. Saturday 29th September begins on North Bridge as we see the heritage fleet in service on route 7 bringing back memories of a bygone era. Heritage vehicles include a Daimler CVG6, Leyland Titan PD2 and PD3, Leyland Atlantean, Leyland and Volvo Olympians and a Leyland National. You will also see a Dennis Trident, a Dennis Dart and even an AEC Routemaster. This Green Line coach has been converted back to closed top having operated as an open-top tour bus and has been completely refurbished to ‘as new’ condition. It is now part of the ‘Lothian Motorcoaches’ fleet. Our cameras take a ride on 135 (FSC 182) the 1949 Daimler CVG6 double-decker to Newhaven. We then explore the ‘Doors Open’ event at the Central Garage of Lothian buses and see the attractions on offer to the public and enthusiasts alike. Filming concludes along Leith Walk and North Bridge as we record this remarkable and enjoyable day in Edinburgh.