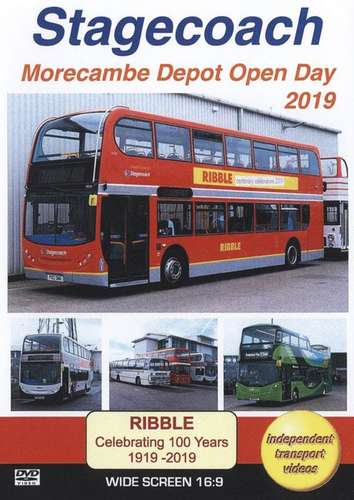 Stagecoach certainly knows how to put on a successful and enjoyable bus depot open day.  The one at their Morecambe depot on Saturday 25th May 2019 was no exception.  The event also tied in nicely with the ongoing celebrations taking place during 2019 celebrating the 100th anniversary of the formation of the erstwhile Ribble Motor Services bus company.  The independent transport videos cameras were on hand to capture the celebrations and atmosphere of the day.

The programme begins at the Stagecoach Cumbria & North Lancs depot in Morecambe situated on the White Lund Industrial Estate where we see the buses arriving and being prepared for the day.  Ribble covered a large geographic area, and today’s bus operators covering this former area have repainted some of their current fleet in the liveries used by Ribble in the past.  Stagecoach have painted two double-deckers, an ADL Enviro400 in the post-deregulation bus livery and a Scania Enviro400 in the post-deregulation ‘express’ Timesaver livery.  Rival company, Arriva, have painted an ADL Enviro400 in the National Bus Company scheme complete with Merseyside PTE logos as was used on the buses in the Liverpool area.  The Arriva bus was also invited to the celebrations and is seen alongside its modern-day competitors on this programme!  We take a cab-ride onboard former Ribble Leyland Atlantean 1686 (NRN 586) to Lancaster bus station to film the contemporary Stagecoach and local independents buses in action.  We travel back to the depot as a passenger on 1481 (TRN 481V), a much later Atlantean AN68 with an ECW body.  Our cameras visit the workshops and catch up with the static vehicles and take in the atmosphere of the day.  We then ride on one of the depot’s latest allocated buses.  Stagecoach 11155 (YX68 UXF) is an ADL Enviro 400MMC double-decker that was our transport for the advertised ‘mystery tour’ which revealed the delights of Heysham Village, Morecambe promenade and the lovely surrounding countryside.  On returning to the depot our cameras take up positions on Northgate and film the arrivals and departures of the local and visiting buses.

Final scenes of the day are recorded at the depot as the modern vehicles in the heritage liveries are lined up for photographs and the visiting buses begin to leave for home.  This was an excellent event and well done to all at Stagecoach for organising this superb day.  The following day, the main RIBBLE 100 event took place in Morecambe and this can be seen on our DVD simply entitled “RIBBLE 100”.  We hope you enjoy the celebrations!