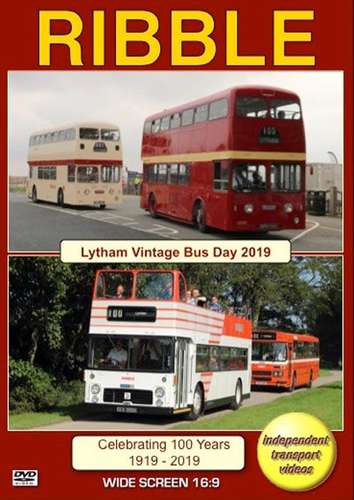 The Ribble Vehicle Preservation Trust’s Morecambe Vintage Bus Day is always an event to enjoy.  This year was no exception, as there was even more reason for celebration – the 100th anniversary of the formation of Ribble Motor Services!  Apart from the usual excitement of the buses running along Morecambe promenade from Carnforth to Heysham Village there were four routes to enjoy as well as a superb display of Ribble and other buses and coaches at the Globe Arena, which is also the home of Morecambe Football Club.  On the promenade there was a display of modern contemporary buses displaying former liveries carried by Ribble buses.  These buses are operated by Stagecoach, Arriva and Transdev, the latter with an interpretation of the original Ribble livery 100 years later.  Of the visiting preserved buses and coaches, there were at least 24 bus companies represented, too many to mention here – you will have to watch the DVD and count them for yourself!  The same applies to the vehicle types present, again too many to mention.  All of these vehicles would have passed a Ribble bus or coach on the highway at some time in their operational lives.  A truly amazing gathering.

Our filming begins at the Globe Arena as the buses and coaches arrive and ‘check-in’.  Unfortunately the weather was appalling with driving rain hindering the filming, but we managed to film almost all of the vehicles without the camera getting too wet!  We then board 2101 (GFR 101W), a former Ribble Leyland Olympian with an ECW body for a ride to Heysham Village and then onto the Winter Gardens on the promenade.  Here we film the action on the windswept sea front and see the buses on display here.  As the weather begins to improve we jump in the cab of former Ribble 1775 (RCK 920) a Leyland PD3/5 with MCW FH72F bodywork for a lovely ride to Carnforth.

Our filming continues at the Winter Gardens and then moves to the Globe Arena to see the visiting vehicles departing for home.  One of the highlights is to see the rare 1929 Dallam Motors ‘Vulcan Duchess’ (EC 8852) moving towards the low-loader that would take it home.  Dallam Motors was taken over by Ribble in 1950.  We also see the RVPT’s Leyland Lion moving around the arena, also awaiting it’s transport back to Freckleton.  Our final scenes are filmed on the promenade by the Winter Gardens.  Here we witness the departures of some of the modern-day heritage-liveried buses from Arriva and Stagecoach in the late afternoon sunshine as well as the final journeys being operated before the day comes to a close.  We would like to extend our thanks to all involved in producing this extra special Ribble Morecambe Vintage Bus Running Day in 2019 – 100 years on from the beginning of such a well known bus company.