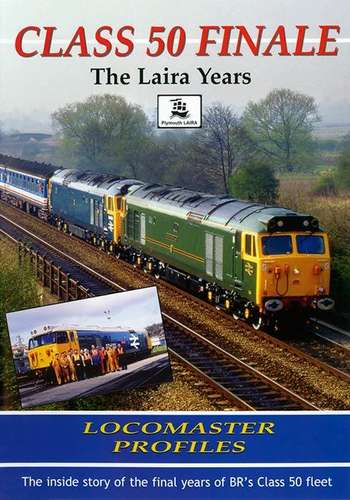 It is more than 15 years since the release of two ground breaking documentaries detailing the dramatic run down and farewell programme of the British Rail Class 50 fleet.

The two programmes - Class 50 Finale and Fall & Rise of the 50s - were produced with the full co-operation of the management and staff at BRs Plymouth Laira depot and detailed every aspect of how the 50 fleet was maintained and managed - from A exams to overhauls.

These two programmes are now being merged into one 2 hour programme and will cover the period from the summer of 1991 (when the last 12 locos were working the Waterloo-Exeter route) to the final railtours in March 1994.

As well as featuring plenty of 'behind the scenes' footage at Laira there is plenty of coverage of the Class 50s at work on the main line as they work a variety of service trains, railtours and specials.

Never before had the rundown of a BR locomotive class been filmed at such close quarters and Laira's former Area Fleet Manager, Geoff Hudson, tells the story of what is now a chapter in railway history.

Among the featured items will be: the last scheduled day of Class 50 haulage on the Waterloo-Exeter route, the Adventures of 'Valiant' and 'Thunderer', convoys of withdrawn locos heading to the scrapyard, the return of 'Sir Edward Elgar', the remarkable story of 'Glorious', many of the Class 50 railtours from August 1991, the entire farewell railtour programme, A and B examinations and how 50033 was restored for the National Railway Museum.

Also covered are test runs, flashover damage assessment, removal and re-fitting of a power unit, bodywork preparation and re-painting, the fitting and removal of nameplates - and several performances of the famous 'Laira Concerto' as various Class 50s are fired-up in spectacular style on the depot!