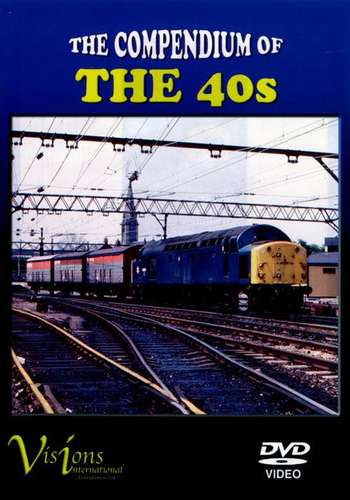 This volume of our popular ‘Compendium’ series considers English Electric’s Type 4, the Class 40.  Footage of the BR years from the early 1970s to the early 1980s delivers an instant nostalgia fix, and it’s complemented with shots of the three Class 40 Preservation Society’s preserved locos in action . . . with lots of clag and thrash, naturally.

‘70s Passenger - this section features the locos at work on various services that traversed the East Coast Main Line.

Parcels & Papers - More from the ECML in the ’70s, plus cross-country paper trains.

The Skegness - The summer Saturday, Manchester to Skegness became a favourite with 40 bashers in 1983 & 1984. This is a selection of the workings.

40 Fade Away - Footage from 1982 to 1984, showing the diverse range of workings the class were used on in the final years. Passenger services, charters and freight all feature.