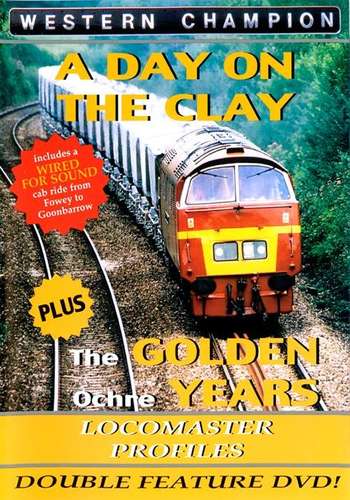 A double feature DVD with two programmes about D1015 Western Champion: The Golden Ocre Years and A Day on the Clay.The Golden Ochre Years is a brand new programme documenting the highlights of the locomotive's first four years on the main line whilst carrying the unique golden ochre livery, which began on January 28th 2002 with its first test run to Sheffield.

Over the following four years D1015 appeared on 22 railtours and special charters in this guise, most of which are featured here.

During that time the locomotive travelled to destinations old and new, so as well as revisiting many classic 'Thousand' haunts, Champion is also seen off the beaten track at locations such as Euston, York, Settle, Llandovery and Hest Bank.

A fuller listing will appear here once we have more programme details.

The second programme on this DVD is A Day on the Clay. Previously only available on VHS, this has been much-requested for release on DVD, and therefore is an ideal companion for the new programme.

When D1015 Western Champion spent a day working off St Blazey on china clay duties on 30th August 2002, it turned the clock back 25 years, reviving memories of when the 'Thousands' were an everyday sight on freight trains in 'The Duchy'. This programme is a record of the day that Champion re-wrote the history books.

We then follow Champion throughout its historic day's activities on Friday 30th, starting at St Blazey where one of the depot's drivers receives some static training on the locomotive.

The second stage of the course involves 'live' handling of the 52 - and what better way to do it than on one of the depot's china clay trips! The first stage of the diagram takes it on a light engine run to Lostwithiel where, after a reversal, D1015 heads along the scenic Fowey freight-only branch to Carne Point.

Once inside the Docks, Champion attaches to a rake of 16 CDA hoppers which comprise the 6G11 to Goonbarrow. With the 52 now 'Wired for Sound' we re-trace our steps back to Lostwithiel, as the tranquil Fowey Valley once again reverberates to the sound of a Diesel Hydraulic.

After a run-round at Lostwithiel, the thrash begins in earnest on the short, sharp climb to Treverrin Tunnel.

At Par, Western Champion heads onto the Newquay branch and the locos two Maybach engines are soon at full bore for the spectacular climb up through the Luxulyan Valley. Not only is the view from the cab spectacular, but the soundtrack is stunning as Champion tackles the awesome 1 in 40 incline.

With Luxulyan bank successfully conquered, D1015 reaches journey's end at Goonbarrow china clay works. After performing a spot of shunting, we leave the footplate of the Hydraulic to savour the sight and sound of the loco from the lineside as it hauls the 6G10 china clay back to Fowey Docks. The loco rounds off an extraordinary day by running light engine back to St Blazey.

The real bonus is that all this happened deep in the heart of Cornwall where the sight of a 'Western' on freight is superbly complemented by countless GWR semaphores, brick-built signal boxes and some delightful scenery. A truly nostalgic setting for the day that time stood still.