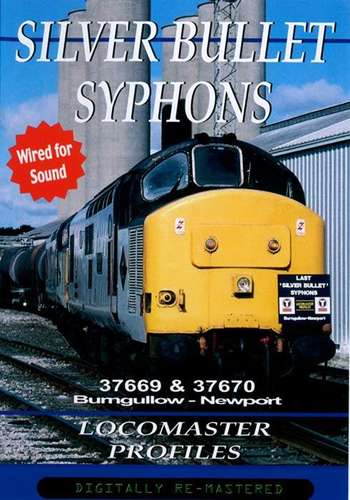 Re-mastered and extended from the original VHS version, this DVD is a Wired for Sound cab ride filmed on board the last booked Class 37s on Britain's longest-distance freight train - the Burngullow to Irvine china clay.

This programme, filmed on 22nd July 1995, features their journey to Newport from where a Class 60 took over the train the following day.

The programme begins at St Blazey depot where 37 669 + 37 670 are fired up before setting off light engine to the ECC terminal at Burngullow to collect 10 loaded china clay tanks.

With 1,100 tonnes in tow, the 37s set off across Cornwall to do battle with the challenging climbs of Treverrin and Largin.

After crossing Brunel's Saltash Bridge into Devon, there's more meltdown as the 37s pound their way up Hemmerdon.

That's followed by more serious thrash as the locos continue to the summit at Wrangaton.

After descending to Totnes, there's the taxing climb up Dainton.

There's a brief respite as the train runs along the sea walls at Teignmouth and Dawlish.

At Exeter, another 180 tonnes are added to the load in Riverside Yard before the train sets off for the climb up to Whiteball summit.

After Taunton speed restrictions, Highbridge and Worle are followed by 'full on' bursts of English Electric power.

After passing through Bristol, Filton Bank has the Type 3s at full tilt again.

But arguably the best thrash of all takes place at the bottom of the Severn Tunnel as the pair turn on the power for the stiff climb up to Severn Tunnel Junction and into South Wales.

That's followed by a short run through Newport to Alexandra Dock Junction Yard where the train recesses to allow the 37s to be detached from the train for the last time.

This digitally re-mastered programme not only contains an extra 20 minutes of previously unreleased footage, but it also has a revised and updated script, narrated by David Maxey.

So, sit back and enjoy some classic traction nostalgia - accompanied by a truly spectacular soundtrack!

Arrival at Alexandra Dock Junction concludes the six hour journey, the "Bullet" continuing to Scotland the next day behind the new order - a Class 60 - thus ending another chapter in locomotive history.

This video brings you the best of the "Bullet" and the results are spectacular! It's exceptionally noisy... and lasts for 90 nerve-shattering minutes! You have been warned!!