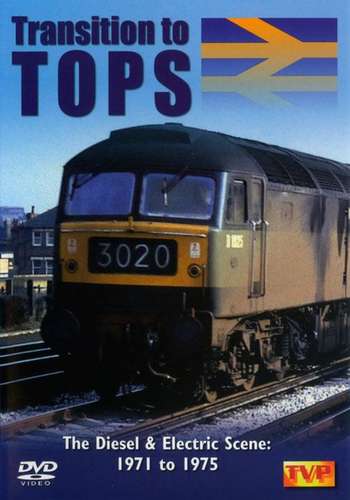 Diesel and Electric Traction during the period 1971 to 1975.

The years after the end of steam traction are particularly fascinating. Corporate blue was now dominant and starting with some electric locomotive classes in November 1971, the entire traction fleet was renumbered; a process which took four years to complete. Then came another change in appearance, when the practice of displaying headcodes on diesel and electric locomotives was ended. In this programme we’ll explore the network in the early 1970s and this period of transition for the motive power fleet.

THE WESTERN MAIN LINE in 1972 with 'Westerns', Warships & Hymeks plus Class 50s & 47s on a variety of traffic. Western Region diesel-hydraulics – a ‘Warship’ & ‘Hymeks’ in their final days. None of the Hydraulics ever received TOPS numbers.

FROM READING TO THE MIDLANDS Banbury, Hatton & the line through Stratford Upon Avon in 1974 feat. Freight & passenger workings with Class 20s, 25s, 31s, 47s & DMUs.

BRISTOL - Traffic on Temple Meads & in and out of the diesel depot incl. Westerns, Class 50s & 'Peaks'.

TO THE SOUTH-WEST - Including Westerns at Paignton.

HATTON BANK in 1975 with a variety of freight & passenger.

WESTERNS - 'The Western Enterprise’ of April 1975 on the Lickey Incline & through the Midlands.

THE WESTERN REGION in 1974 with wagonload freight, Class 47, Peaks & Westerns.

THE WEST COUNTRY in 1974 with Peaks & Westerns on the line through Dawlish.
Colour with full commentary.