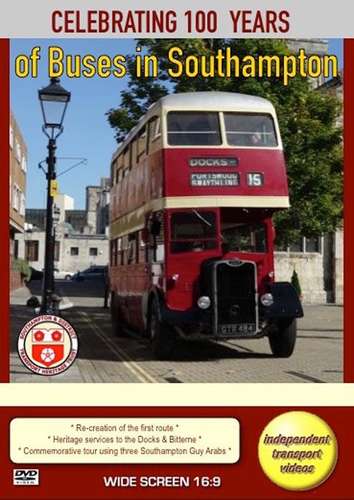 The year 2019 marks 100 years of continuous bus operation in the city of Southampton. The first route, No.2, began operation on Thursday 31st July 1919. To celebrate this, 100 years later, on the evening of Wednesday 31st July 2019, the members of the Southampton & District Transport Heritage Trust (S&DTHT) marked the occasion with a re-creation of that route for members and friends using three former Southampton Corporation vehicles. These were Guy Arab III - 64 (FTR 511), AEC Regent V - 367 (BTR 367B) and Leyland Atlantean - 133 (TTR 167H). As you can imagine the course of the route has changed over the intervening 100 years, but the best was done to re-create the original journey and a description of the history of the route written by member, John Ashbridge is included in this DVD case. The independent transport videos cameras were invited to record the evening’s activities for all to see. We put a camera in the cab of the Guy Arab whilst our cameraman filmed from the rear upstairs window of the Atlantean as we traced the route from Pound Tree Lane in the city centre to the Aldermoor turning circle.

The second section of this celebratory programme features the events in the city centre on Saturday 14th September during the ‘Southampton Transport Anniversaries Weekend’. This event was also arranged by the S&DTHT and was centred on Castle Way in the historic area of the city. It was one of the events contributing to the ‘Southampton Heritage Open Day’ organised by the Southampton Heritage Foundation. Here we took a ride on open-top Guy Arab 64 (FTR 511) on Service A to visit the Steamship Shieldhall that was moored at Southampton Docks. Our next journey out from Castle Way was onboard 335 (335 AOW), a Leyland Titan PD2A, on Service B to Bitterne, where passengers had a chance to visit the Bitterne Local History Centre. We travel on the lower deck of this lovely vehicle and experience the sights and sounds that passengers would have had back in the 1960s. On returning to Castle Way we see the preserved buses in action at St Michaels Square, Bugle Street and travelling along Town Quay.

The third part of this Southampton bus celebration is a special commemorative tour on the same day using three of the remaining preserved Southampton Guy Arabs. We film the tour for you from the platform of Guy Arab 71 (LOW 217) with 222 (GTR 484) following and open-top 64 (FTR 511) bringing up the rear. This fascinating trip really shows these wonderful buses in action. We travel along the roads they did in the past and pass the modern-day buses that are operated in Southampton by GoSouthCoast (Bluestar) and FirstBus.

We conclude our journey at Castle Way, as all three Guy Arabs line up for a photograph! We would like to extend our thanks to the Southampton & District Transport Heritage Trust for organising these events and for their assistance in allowing us to film it for you. We are sure you will enjoy watching this DVD programme.