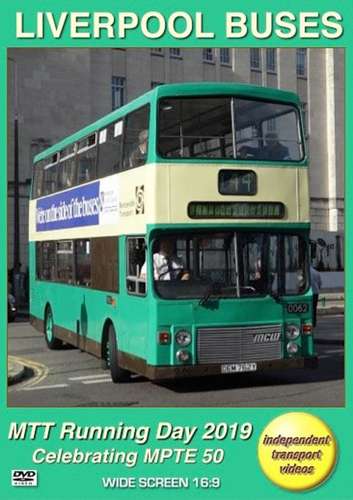 Independent transport videos welcome you to this, our 12th edition DVD programme of the Merseyside Transport Trust's (MTT) annual “Liverpool Buses Running Day”. This year was also very special in that the MTT reached its 20th year and that in 1969 the Merseyside PTE (MPTE) was formed - 50 years ago. Also celebrating its 50th birthday is the erstwhile National Bus Company (NBC), so some of the buses seen on this programme represent that bygone era of local transport. This year the event was centred on Mann Island at Liverpool Pier Head with services running to both north and south Liverpool, introducing areas not covered on previous running days. These included Netherton, Lower Lane, Speke, Penny Lane and for the first time buses ran through the Mersey Tunnel to Liscard and Wallasey.

Our filming begins bright and early on a very sunny morning on Mann Island at Liverpool’s iconic Pier Head. We film the buses running in service as they arrive as well as four preserved Ribble buses and coaches forming a special “Ribble 100” display as 2019 sees the centenary celebrations of that well-loved bus company. By 10 am Mann Island is awash with buses featuring the liveries of Liverpool Corporation, Wallasey Corporation, the MPTE (both Liverpool and Wirral divisions), the NBC - with buses from Crosville and Ribble. Buses featured are a Leyland Titan, Atlanteans, Panther, Leopard, Tiger, Nationals, Bristol REs and a Metrobus to name but a few.

We take a ride onboard Liverpool Corporation L501 (501 KD), the 1962 Leyland Atlantean on service 72 from Pier Head to Speke. We have a camera in the cab for the driver’s eye view and one for the passenger’s perspective in both the lower and upper saloons. We return to the Pier Head ‘as a passenger’ onboard former Crosville ERG280 (YFM 280L), a 1973 dual-purpose Bristol RELL6G operating part of the Crosville H1 service that ran from Warrington to Liverpool Pier Head back in day. With plenty more filming at Mann Island we then put our cameras onboard Wallasey Corporation number 1 (FHF 451), the very special, first production, 1958 built Leyland Atlantean for a journey back to its old haunts, New Brighton. With a camera at the front of the lower deck and one in the upper saloon, we have an enjoyable journey through the Mersey Tunnel and Liscard. Our filming concludes at Mann Island where the day started. Here we film all of the action as the buses arrive and then set off on their final journeys of the day with some leaving for home. We would like to say a big thank you to all concerned as usual for putting on this superb show for all to enjoy.