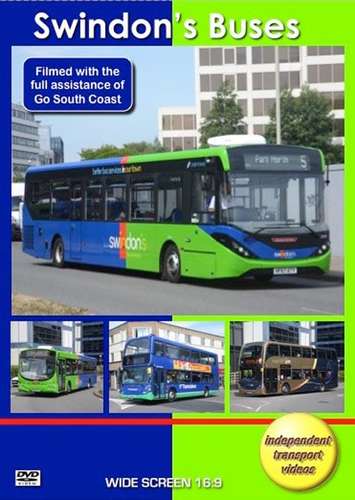 Back in the mid-20th century bus services in and around the Wiltshire town of Swindon were operated by two bus companies, Swindon Corporation Transport and Bristol Omnibus. In 1974 a reorganisation of local government took place and Swindon Corporation Transport buses were renamed Thamesdown Transport. In September 1986 Thamesdown Transport became a limited company at ‘arms length’ from the borough council ready for Deregulation in October 1986. In 2017 the company was acquired by Go South Coast and was rebranded as ‘Swindon’s Bus Company’, the buses wearing a smart green and blue livery. Meanwhile Bristol Omnibus was split up prior to Deregulation. In 1983 Western Travel Ltd was formed to operate the former Bristol Omnibus services in Gloucester and Wiltshire. Local branding was adopted and ‘Swindon & District’ served the town. In December 1993 Western Travel was sold to Stagecoach and it is Stagecoach West that still operates in the Swindon area in 2019. Our filming on this DVD programme takes place during August in both 2018 and 2019. Locations in 2018 include Manchester Road, Corporation Street, Station Road, Fleming Way, Princes Street and the Bus Station. Here we see ‘Swindon’s Bus Company’ buses in-service in both their new Go South Coast livery of green and blue as well as their former scheme of a darker blue and green with stylish graphics still with large ‘Thamesdown’ fleet names. Stagecoach buses are also seen in service. Older Swindon vehicles are Wright Solar-bodied Scania single-deckers, some in the old livery. Newer buses are Optare Versa, Wright Streetlite and ADL Enviro 200 and 200MMC single-deckers. Double–deckers are former ‘Thamesdown’ Scania with East Lancs OmniDekka bodies that are used mostly for contract work, but also occasionally on stage-carriage duties. Further filming takes place at Regent Circus, Commercial Road, Farnsby Street, Farringdon Road and Emlyn Square. The 2018 filming concludes in the pretty market town of Marlborough, where the short ADL Enviro200 buses are seen.

The 2019 visit to Swindon begins at the smart, modern bus depot of ‘Swindon’s Bus Company’. Our cameras were invited by Go South Coast to film inside the workshops and parking area. Here we see the buses being attended to in the modern workshops and also have a look in detail at 2776 (HF67 ATX), one of the new Enviro 200MMC single-deckers that have ‘sociable seating’ at the rear. We also take a look inside 507 (WX06 JYC), a Scania – Wright Solar single-decker that has been converted to a permanent training bus. Our cameras travel onboard 403 (WX60 EDV) an Optare Versa into the town centre for more filming at a number of locations including Fleming Way. A further ride is taken on 2775 (HF67 ATV), an ADL Enviro200MMC to Orbital Shopping Park and we return to Rodbourne Road on 219 (OY16 JVZ), an ADL Envrio 200 to complete our 2019 visit to Swindon.

We conclude with some archive video from the camera of Malcolm King of two visits he made in the early 1990s featuring the buses in Swindon. We would like to thank Go South Coast for their help in the making of this programme and we hope you enjoy viewing it.