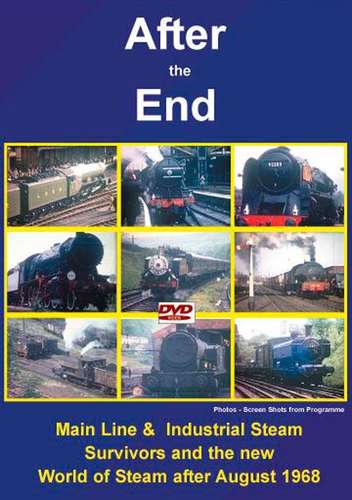 Main Line working steam came to an end in August 1968. However there was still plenty of steam activity at numerous Industrial sites as well as the fledgling Heritage network. This programme takes a trip around the country and looks at everything from Flying Scotsman to NCB operations.

Steam on the Metropolitan - 57xx Pannier tanks on engineering duties to Croxley Tip and at Neasden.

A New Era of Steam - Fledgling Heritage lines in the late 1960s featuring the Keighley & Worth Valley, the North Norfolk, the Bluebell, the Bulmers site at Hereford with ‘King George V’, Tyseley with main line locomotives including ‘Flying Scotsman’, the Severn Valley & the Kent & East Sussex Railways.

The National Coal Board in the North East at Philadelphia with Hunslet Saddletanks, Lambton Tanks, Robert Stephenson 0-6-2 tanks.